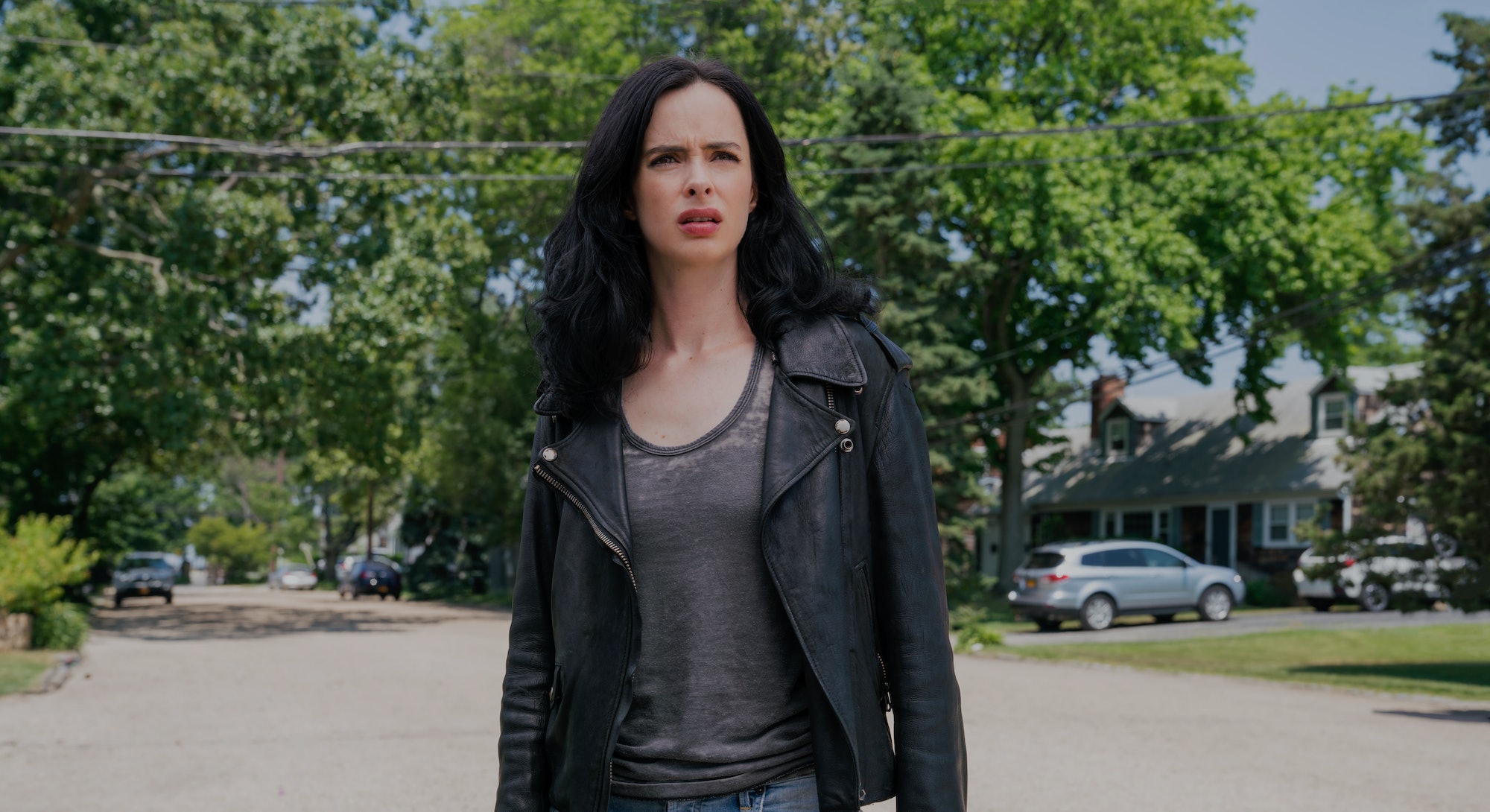 When I met with Jessica Jones star Krysten Ritter recently in New York’s Chelsea neighborhood, she wanted to first focus on a different show. The trailer for the second season of Luke Cage, a series that takes place in the same New York City in which Jones walks, had just dropped. “It’s on Mike’s Instagram,” she says of her co-star and friend, Mike Colter, who plays Cage. She invites me to watch it, too. Curious about the next Marvel show myself, I accept. “That’s awe-some,” she enthuses as the trailer’s closing lines — “Get paid black man, get paid!” — boom from her iPhone speaker.

Of course I said yes. Why wouldn’t I want to watch a Marvel trailer with an actual Marvel hero? The alternative — saying no — would be awkward, as I’d stand there hearing bad guy grunts and old school hip-hop out of her iPhone for thirty seconds. But mostly, I didn’t want to say no to Jessica Jones. Because Ritter’s real life superpower, I discover, is the ability to command a room.

“I think there is an anger and frustration that is lying dormant in everybody,” Ritter tells Inverse, her phone now on silent. “Jessica is outwardly expressing that anger. The physical stuff helps me. When Jessica punches somebody, she’s very powerful. That translates and gets into my blood.”

On Thursday, the hard-drinking, take-no-shit Ritter returns as Jessica Jones in the second season of the Netflix series. Picking up where the The Defenders leaves off, the superpowered private investigator Jones is barely putting up with her newfound fame. In the first episode, when a child excitedly asks, “Are you a vigilante superhero?” Jessica rolls her eyes, “Oh for Christ’s sake.”

Ritter knows being a superhero matters to young girls and women. In 2015, when Jessica Jones debuted on Netflix, the series took the TV genre into new territory: A power fantasy that dealt directly with trauma, PTSD, and sexual abuse. In Season 1, she confronted her abuser, Kilgrave (David Tennant), who used his own hypnosis super-power to essentially gaslight his victims.

Season 1 came two years before the allegations against Harvey Weinstein and scores of other powerful men rippled through the culture in wave after wave of women speaking out. It sparked the #MeToo movement and created the Time’s Up Now legal defense fund.

“It’s a coincidental, uncanny coincidence that we’re exploring storylines we’re hearing, unfortunately, in real life,” Ritter says. “But messy characters like this are more timely than ever.”

Ritter inhabited Jones’ messy character — “I don’t mimic her, I am her,” she says — through preparation that found her drained after the first season wrapped.

Ritter says she invested so much time studying the “violence” inherent in Jessica’s most frequent actions: Walking, sitting, and drinking, all of it emblematic of what she’s been through.

“She drinks whiskey violently and viciously. She’s not taking a sip, she wants to get fucking drunk, so she slams it back.”

As Jones, Ritter’s walk in the series is really distinctive; it’s a purposeful march, sort of how someone might walk if they’d just been wronged and were on their way to seek revenge. Her strides are forceful, with her arms at her side and her hands sometimes clenched into fists. It’s a quietly physical performance that would exhaust anyone, save for a superhero.

As a result, the first season exhausted Ritter, emotionally and physically. “I was depressed when we wrapped. I was like, ‘Oh my god, what just happened?’”

The actress credits the stress of Season 1 for allowing her to better harness her abilities — sort of like a real superhero. “Because I had that experience I was able to better understand what kind of stamina, what kind of discipline was required in terms of taking care of my body — in terms of food, balance, knitting, and listening to music. Not just going into the darkness, because this show is so dark.”

“Krysten is an incredibly detailed actor,” says co-star Rachael Taylor, who stars in Jessica Jones as Jessica’s foster sister Trish. “I’ve learned a lot from her. It bleeds on the screen — passion, fire, and grit. That’s what we do on the show. That comes from preparation. You just can’t show up and learn the lines and expect to crush it.”

Throughout her career, Ritter was a TV actress with “Best Friend” supporting roles, in Veronica Mars, Gilmore Girls, and the rom-com Confessions of a Shopaholic, Then, in 2009, Ritter exploded as the fated Jane Margolis in a nine-episode run on Breaking Bad. After the untimely end of the sitcom Don’t Trust the B in Apartment 23, Ritter entered the Marvel Universe as Jessica Jones, a superpowered P.I. who trades spandex and super serum for leather jackets and Jameson.

But fans resonated to Jessica in a big way when the show premiered in 2015. In an essay on Cracked published in December that year, Alice Jane Axness writes about surviving her own abuse and finding solace in Jessica Jones.

“After finishing the first few episodes, I sat in silence, alone in my room, crying,” Axness writes, “I was so goddamn excited about this show that it brought me to tears. It’s really hard to be an abuse survivor and see no accurate representations of what it is like, but goddamn does Jessica Jones deliver.”

In another December 2015 essay on Bustle, Patricia Grisafi writes from the perspective of a survivor, praising Jessica Jones and its unapologetic portrayal of how survivors struggle to overcome trauma. “The show … demonstrates exactly how particular places and events can be triggering. Very few TV shows or movies get this experience right. But Jessica Jones nails it.”

Between the two seasons of Jessica Jones, the large swaths of the culture woke up. Though not without resistance, the voices in #MeToo and Time’s Up are putting an end to years of unchecked, terrible behavior that was ignored by entrenched systematic forces. The relevance of the Marvel series is no longer prescient, it’s urgent. And Ritter believes her Marvel heroine can be, if people choose to, as an avatar for the anger that’s in everyone.

“Everything that’s happened with Harvey Weinstein and the explosion in Hollywood, which is spread out beyond Hollywood and happening forever, I think that has ignited that anger and frustration in everyone I know,” Ritter says. “Myself included.”

Season 2 of Marvel’s Jessica Jones is streaming now on Netflix.