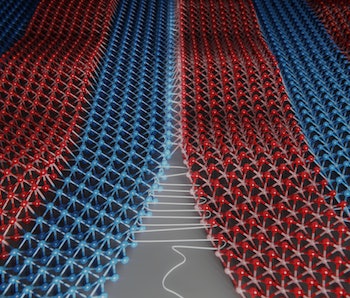 Mixing and matching two seemingly distinct components has led to some of humanity’s greatest inventions. Reinforcing concrete with steel made skyscrapers possible. Stitching together the atoms of various substances has led to composite materials, like carbon fiber and fiberglass, that are used in our phones, cars, and homes.

Now researchers at the University of Chicago have figured out a way to drastically improve the way engineers go about creating these compound materials. In a paper published in the journal Science, Saien Xie and his colleagues were able to seamlessly merge the atoms of two materials together, as if they were just one structure. This is a feat that even the scientists involved were astonished they were able to achieve.

“It is surprising that different atomically-thin crystals can be seamlessly sewed together, atom by atom, without leaving holes at the interface,” Xie tells Inverse. “This is possible because we developed a technique that allows different atomic crystals to grow under the same constant environment with the same high quality.”

This technique allowed for the creation of a flexible and ultra-thin material that electricity can easily pass through. This atom-thick conductive material could be used to make exceptionally light electronic devices, like phones or TV screens. These types of products will become commercially available in less than five years according to Xie.

Scientists could also make use of these fabrics to track the change in objects and even microscopic life.

“We are making an ultra-thin, light, and flexible [strain-sensing fabric] which can emit light,” said Xie. “The idea is that you can put these fabrics on any object to monitor its mechanical status by looking at the color of light emitted from the fabrics. In fact, these atomic fabrics are so thin that you can potentially put them on a cell and monitor how [it] expands or shrinks.”

These types of applications weren’t possible before because other techniques used to fuse materials at an atomic level would always leave tiny holes in the final produce, almost like a knitted sweater. Xie’s team results are the most perfectly aligned single-layer materials ever made.

With this technique under their belts, engineers can get wildly creative with embedding electronics on almost any surface. This leaves the door open to sleek touch screens on clothing or even phones as thin as a sheet of paper.