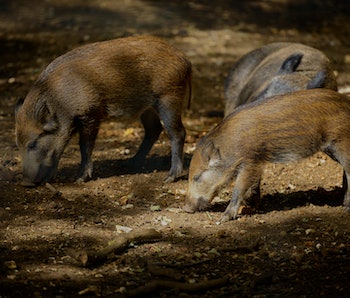 If you ever cook pork at home, you’ve probably heard that you need to cook ground pork to 160 degrees and whole-muscle pork to 145 degrees to make sure any bacteria or other parasites are killed. Fortunately, this isn’t always true anymore, as hygienic standards and regulations have improved to the point that you can enjoy a medium-rare pork chop in a restaurant or at home.

Unfortunately, it’s a much different story if you want to eat boar, the wilder, gamier cousin of the pig. On Thursday, the Centers for Disease Control and Prevention announced in its Morbidity and Mortality Weekly Report that game meat must be much more carefully handled unless you want to risk getting a parasite that can literally make your freaking eyes bleed.

In the announcement, doctors report that Californians who ate raw pork at a party in December 2016 became sick after they got infected by Trichinella spiralis, a parasitic worm that is relatively rare. At the party, 36 people were exposed to possible infection when they ate pork from a boar raised and slaughtered on a family’s private farm or ate leftovers brought home from the party.

It’s a real shame, because the meal sounds like it was delicious. The dishes included grilled pork, pork stew, and perhaps the most likely culprit, larb, a traditional Laotian dish. Larb can be made from various types of cooked or uncooked meat, but in this case, the cooks decided to go raw, according to an Alameda County Public Health Department investigation. Of the party guests, doctors confirmed 10 cases and suspected two additional cases of trichinellosis, the condition caused by infections of T. spiralis.

This parasitic infection isn’t your typical bout of food poisoning in which you just have diarrhea for a few days. In addition to the abdominal pain, diarrhea, and vomiting you can usually expect, trichinellosis can cause serious health problems, including conjunctival and retinal hemorrhaging — yes, bleeding from your eyes.

Fortunately, none of the people affected by the outbreak died, but many ended up in intensive care.

“Nine had sepsis, seven had acute kidney injury, and two had gastrointestinal bleeding,” reports the CDC. To investigate what caused their health problems, doctors surveyed the patients and acquired a sample of the raw pork from the people who prepared it. Under a microscope, they could clearly observe the Trichinella cysts, small pockets that the larvae form in the muscle tissue of an infected animal. Cysts formed by this species can be found in game meat.

The farm’s owner asserted to the CDC that there had never been a problem like this before and that the pigs raised there only eat commercial feed and never meat — which is one way the boars might have been infected.

However, a closer look at the details of the farm offered some insight into the source of infection.

“The farm owner denied any rodent infestation issues on the farm but did state that small animals such as chicks had occasionally gotten into the fenced pen and been eaten by the pigs, indicating that small mammals infected with Trichinella could have entered the pen and been consumed by the swine,” the CDC report stated.

Trichinellosis is relatively uncommon, but for anyone it affects, it can be quite serious. And since privately raised livestock isn’t necessarily subject to the same regulations as large-scale operations are, the CDC stresses the importance of educating these small-scale operators on how to prevent the spread of Trichinella worms.

In the meantime, feel free to have a mid-rare pork chop, but if you’re cooking meat that’s not from a well-regulated farm, do yourself and your eyeballs a favor and freeze your game meat for at least 30 days. Then, still break out your meat thermometer and make sure you really cook the heck out of it.

More like this
Science
6.27.2022 11:00 AM
Letting your cat go outside could spread “life-threatening” parasites — new research
By Amy Wilson, Scott Wilson and The Conversation
Science
6.23.2022 11:00 AM
Historic Yellowstone flooding and more: Understand the world through 8 images
By Robin Bea
Science
6.16.2022 10:00 AM
Climate change and air pollution are wrecking children’s health, a landmark review reveals
By Tara Yarlagadda
Related Tags
Share: