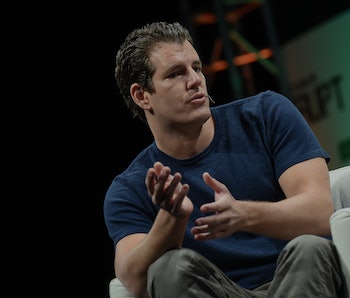 Litecoin has enjoyed some recent undivided attention from cryptocurrency enthusiasts with the ultimately confusing launch of LitePay. But the truth is that perhaps more than any other coin, it is defined in terms of bitcoin. Litecoin uses almost exactly the same blockchain technology as bitcoin, and it was specifically created to be a more accessible, user-friendly alternative to bitcoin.

At a speaking event on Tuesday, Facebook pioneer and bitcoin billionaire Tyler Winklevoss took that point to its logical conclusion. By his reckoning, Litecoin isn’t the silver to bitcoin’s gold, or the Vegeta to bitcoin’s Goku, as coin creator and Dragon Ball Z fan Charlie Lee is fond of tweeting about. Rather, he said Litecoin is basically one big beta test for potential bitcoin features rather than an end in and of itself.

The technical term that Winklevoss used is “testnet,” which is any alternative bitcoin blockchain designed strictly for testing purposes. A testnet has its own coins, but this cryptocurrency is not supposed to accrue any actual value. Developers can experiment with the testnet without posing any actual risk to the all-important main bitcoin blockchain.

Of course, there’s a big difference between a testnet that has no value and Litecoin, which has a market capitalization of $11.8 billion. Sure, that’s only a tiny fraction of bitcoin’s $182 billion market cap, but that’s still good enough to make Litecoin the world’s fifth-biggest digital currency, but then everything is tiny compared with bitcoin. Ethereum is the runner-up to bitcoin, and its market cap is $85 billion, less than half of what bitcoin’s is.

Calling Litecoin a testnet might sound a little patronizing, especially when Winklevoss said bitcoin really is like digital gold — except better at being gold than gold is given the cryptocurrency’s far greater portability — and Ethereum is like an oil, the fuel for a protocol layer on which developers can build all sorts of applications. But there’s reason to think calling it a testnet instead of, say, digital silver is more Winklevoss’s assessment of its usefulness in the cryptocurrency world rather than its importance.

Consider when he was later asked about whether he and his brother’s exchange would add Bitcoin Cash, a hard fork of the original bitcoin. While he and his brother Cameron were cagey on this point, they contrasted the nature of Bitcoin Cash’s separation from bitcoin with the “friendly fork” that Litecoin represented.

Besides, Winklevoss might have a point about the digital silver comparison no longer making much sense, though weirdly it’s because Litecoin has accrued a ton of value in its own terms. It’s hard to argue these days the coin is really all that more useful than bitcoin as a method of exchange given its own price swings and frequently surging value. When there’s nearly as much call for investors to “hodl” Litecoin as there is for bitcoin, perhaps it really is most useful as one colossal ongoing beta test for its big sibling.

More like this
Gaming
7.4.2022 4:00 PM
GTA 6's most controversial rumor probably won't happen — here's why
By Robin Bea
Innovation
23 hours ago
A single color is reason enough to buy a Jaguar XF
By Jordan Golson
Innovation
7.2.2022 6:00 PM
Are self-driving cars safe? The tipping point rests on a psychological illusion
By Jean-François Bonnefon and The Reader
Related Tags
Share: