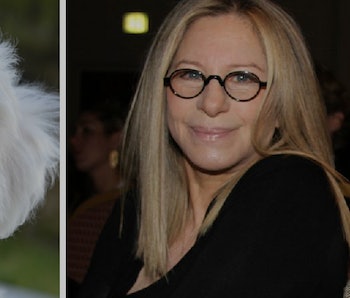 In an effort to keep things the way they were, Barbara Streisand owns two clone dogs created from her recently deceased Coton du Tulear, Samantha. Named Miss Violet and Miss Scarlet, the dogs were created from mouth and stomach cells taken from Samantha before she passed. The famed singer and actor revealed the unusual origins of her pets in an interview with Variety posted on Tuesday.

Streisand also has a third Coton du Tulear named Miss Fanny, but she is just a distant cousin of Samantha, not an extremely expensive scientific marvel. As for Miss Violet and Miss Scarlet, Streisand asserts they “have different personalities,” but she’s “waiting for them to get older so I can see if they have her [Samantha’s] brown eyes and seriousness.”

If you, like Streisand, want to clone your dog, you can ship in your animal’s frozen cells, along with $50,000, and receive a cloned pet. (Cats are, mysteriously, half the price.)

But while the process is now available to the wealthy elite, cloned dogs are a reasonably recent phenomenon: The first cloned dog, Snuppy, was only born in 2005. This November, four clones of Snuppy were born, with three making it past infancy.

The cloning process used to create new animals is called reproductive cloning. This technique involves removing a mature somatic cell — like the cells taken from Samantha — and then transferring the DNA from the cell into an egg cell that doesn’t have its own DNA-containing nucleus. This egg then spends some time in a test tube, developing into an early-stage embryo, before it’s implanted into the womb of a surrogate mother. Since 1996, when Dolly the sheep became the first cloned mammal, many other animals have been cloned, including chickens, cows, and horses.

While her pets are exact genetic copies of one another, Streisand’s hope that her cloned dogs will shadow Samantha’s serious personality may be fruitless. While genes can influence personality and behavior, you can’t assume clones will take on the personality of their origins because their environment is just as important as their genes.

“Temperament is only partly determined by genetics; a lot has to do with the way an animal has been raised,” the FDA asserts in a cloning factsheet. “It’s the old ‘nature versus nurture’ argument … he would have to have exactly the same life experience as your original horse [in this case, the example is horses] in order to have the same temperament.”

Will growing up in the same embrace and Malibu estate as Samantha turn Miss Violet and Miss Scarlett into mini-mes? Only time and love can say.

More like this
Science
5.8.2022 1:00 PM
Should you exercise your dog on a treadmill? Here's what veterinarians say
By Tara Yarlagadda
Science
5.13.2022 12:00 PM
The greatest sci-fi epic on HBO Max reveals a provocative scientific debate
By Tara Yarlagadda
Science
5.15.2022 11:30 AM
Octopus facts: 5 incredible tidbits you didn't know about the cephalopod
By The Conversation, Erin Spencer and Yannis Papastamatiou
Related Tags
Share: