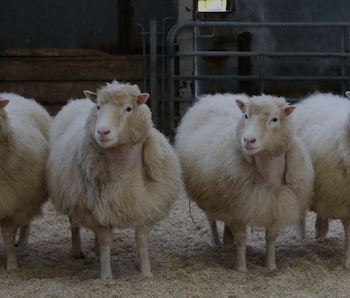 A new report suggests that cloning does not cause animals to age prematurely, as was previously suspected. The article, published Tuesday in Nature Communications, explains how researchers studied health indicators for 12 cloned sheep, ages 7-9, including four from the same cell line as the famous Dolly. Daisy, Diana, Debbie, and Denise are all doing fine, showing only normal afflictions associated with their age.

This is great news for anyone who has fantasized about having their beloved pet dog or cat cloned through multiple generations, allowing it to live, in a sense, forever. This isn’t even a fantasy anymore, at least not if you happen to have $100,000 kicking around. A South Korean company named Sooam Biotech made this a reality for wealthy pet owners who manage to harvest cells before or within five days of their beloved’s death. “Sooam not only performs dog cloning research, but we also heal the broken hearts,” claims its website. The ethical issues surrounding the treatment of the egg donor and surrogate mother remain, but at least you can rest assured that if the process produces a healthy pup, Spot Jr. will have the same chance at a long, healthy life as little ones produced through good old fashioned doggie-style sex.

The myth that cloning causes premature aging is very common. When the original clone Dolly was made from the genetic material of a six-year-old sheep, the idea was that she might have had the genetic age of six at birth, and that this could cause various health problems. The theory was bolstered by the fact that Dolly actually did have many illnesses, including lung cancer that led caregivers to put her down at age six. Sheep regularly live twice that long.

Cloning science has had its ups and downs since the surprise success of Dolly’s birth 20 years ago this month. Now China’s sticking its neck in the game with a promise to build the world’s largest cloning factory, set to produce a million cattle to feed the growing country. Human cloning so far has limited itself to trying to produce embryonic stem cells for medical research and therapies, but there’s no technical reason that the same animal cloning procedure can’t be applied to people. And if can be done, smart money would bet that before long someone will try.