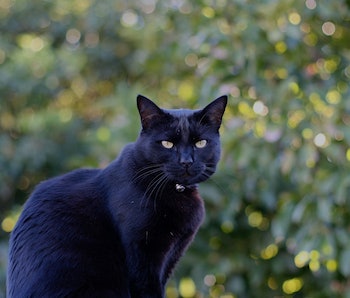 Since the premiere of Black Panther, the internet has grown obsessed with the idea that people now really love black cats. The story of T’Challa and his connection to the big cat is allegedly tearing down the stigma that surrounds black cats — which, in turn, has resulted in an unprecedented number of black shelter cats finding their forever homes.

It’s a lovely idea, but whether the black cat redemption story it perpetuates is true is debatable. It all started with a Tumblr post, published on Monday, which drew straight line between the Marvel film and cat adoption, reporting that their local shelters in Durango, Colorado had seen all their black cats fly out the door with eager adopters.

“My local pet shelters went from having something like 50-60 black cats between them to having NONE, because they’ve all been adopted out and named after the characters. ‘T’challa’ is the most popular, but there are a fair number of ‘Okoye’s and ‘Shuri’s as well,” user gallustrostromegallus wrote. “…and one very confused Elderly Humane Society Volunteer wondering why someone would name such a sweet cat ‘Killmonger.’” The blog has over 85,000 notes as of this article’s publication.

For lovers of black cats, this is a heartwarming tale of how Black Panther has made black cats not only a little less sinister but actually desirable and cool. After all, as Inverse previously reported, humans have subjected black cats to a long and shitty history of suspicion, disdain, and straight-up slaughter. The American Society for the Prevention of Cruelty to Animals even participates in annual Black Cat Appreciation Day in August, when people can adopt black cats at a reduced fee. This special emphasis on black cats would seem to suggest that black cats have a hard time finding homes when they’re in shelters, so the Tumblr post makes it sound like things are looking up for black cats.

However, despite the stigma surrounding black cats, the ASPCA tells Inverse it’s actually wrong to assume that black cats are adopted any less frequently than cats of other colors.

“The ASPCA’s national research shows that black cats are not at risk of low adoption rates as they are adopted more frequently than any other color of feline, but it also shows black cats make up the largest percent of total cats entering shelters,” Jody Salbo, the director of business development for the ASPCA Adoption Center, tells Inverse.

This suggests that black cats don’t actually face the stigma that they did throughout history, which is great news for cats.

“In fact,” says Salbo, “year after year we have found black cats and dogs are adopted more than any other color of animal. This myth is likely the result of the total numbers of animals entering the shelter system. Our research shows generally more black dogs and cats enter the shelter system, making it appear that they are more at risk.

A 2010 study in the .Journal of Applied Animal Welfare Science suggested that black cats are actually more desirable than other colors of cats, though the data from that study didn’t make use of a big enough sample size to draw this conclusion with great certainty.

The ASPCA also says that since the release of Black Panther, the organization’s adoption center in New York City hasn’t experienced an increase in the number of adoptions or requests for black cats. The group’s adamant assertion would seem to be at odds with its participation in Black Cat Appreciation Day, but Salbo tells Inverse that the ASPCA doesn’t limit its promotions to black cats.

“We also host special promotions on other holidays and observances throughout the year in order to highlight different animal populations in our shelter, including large dogs, adult dogs, senior dogs, and adult cats,” says Salbo.