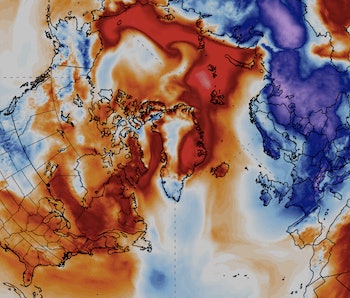 On Monday, a blanket of snow covered Rome, prompting snowball fights, school closures, and warnings from climate change scientists that the exceptional weather pattern may indicate even worse events to come. The snow, the first to fall in the region in six years, is part of a cold front that hit Europe on Friday and, according to the World Meteorological Organization, may last two to three weeks. This extended cold spell has caused parts of Europe to become colder than the North Pole as unusually high temperatures currently cover the Arctic.

Nicknamed the “beast from the east,” the cold front in Europe is forecasted to spike on Tuesday and Wednesday. Southern Europe is anticipated to return to its average temperatures by the end of the week, while Northern and Eastern Europe will likely stay unusually cold until next week. Across the Arctic, temperatures are approximately 36 degrees Fahrenheit above normal, and the Arctic Ocean sea ice is at a record low for late February.

The World Meteorological Organization explains that the weather events in the Arctic and Europe are connected because of a “sudden stratospheric warming” event that happened approximately 30 kilometers over the North Pole. This caused a split in the northern polar vortex, a low-pressure area above the pole that’s full of the strong winds the Arctic relies on to keep cold. The event ushered in usually high temperatures in the Arctic and sent a jet stream of cold south to Europe.

Erik Solheim, head of U.N. Environment, told Reuters on Monday that these events are part of a wider weather pattern driven by the buildup of greenhouse gases.

“What we once considered to be anomalies are becoming the new normal,” says Solheim. “Our climate is changing right in front of our eyes, and we’ve only got a short amount of time to stop this from getting significantly worse.”

Solheim is not alone in his concerns. Other scientists fear that the sudden stratospheric warming may not be an anomaly but an indication that global warming has eroded the polar vortex. The mass of whirling winds is usually maintained by temperature differences between the Arctic and mid-latitudes, but as the North Pole has warmed, there’s a possibility that the vortex has become less stable.

That effect has previously been proposed in a controversial hypothesis known as “warm Arctic, cold continents.” While scientifically contentious, the idea behind the hypothesis is that as global warming reduces Arctic Ocean sea ice and in turn exposes warmer water that releases heat into the atmosphere, atmospheric patterns like the polar vortex will change. Hypothetically, that would cause cold Arctic air masses to shoot southward, letting the air up north become relatively hotter.

The big question is whether or not the current events are freak incidents or part of a larger, scarier pattern predicted by the “warm Arctic, cold continents” hypothesis.

“This is an anomaly among anomalies. It is far enough outside the historical range that it is worrying — it is a suggestion that there are further surprises in store as we continue to poke the angry beast that is our climate,” Michael Mann, Ph.D., the director of the Earth System Science Center at Pennsylvania State University told the Guardian on Tuesday. “The Arctic has always been regarded as a bellwether because of the vicious cycles that amplify human-caused warming in that particular region. And it is sending out a clear warning.”