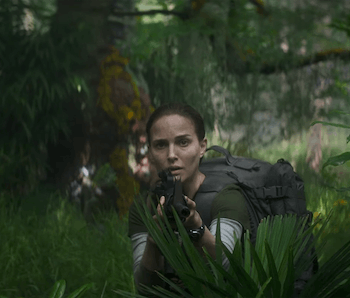 Alex Garland’s cerebral sci-fi adaptation, Annihilation, opened to $10.6 million on its first weekend in theaters, on par with its projected $10-$12 million range.

Based on the Southern Reach sci-fi novels, Annihilation stars Natalie Portman as a biologist that is heading into a mysterious disaster zone dubbed “The Shimmer”, as part of a five-women team, to understand what it is and how to stop it from further expanding. Portman’s character, Lena, is drawn to the mission partially because her husband, played by Oscar Isaac, was the only person sent in to ever return, but in a profoundly incapacitated state. But this stated reason is only one of her motives. Like every other character, Lena is drawn into this likely suicide mission for darker reasons, and it is these internal, psychological dynamics that the film explores.

Because it doesn’t quite fit into the easy categorization of standard action-packed science fiction thrillers,Annihilation was always going to be a bit of a risk.

Despite positive reviews — 87% among critics and 64% audience score on Rotten Tomatoes — negative early screen tests called it “too intellectual” for general audiences. But Garland refused to reshoot to dumb it down to make it more generally appealing, perhaps sealing the film’s fate to lower box office numbers — and to studio Paramount’s next move. Paramount gave the film a public vote of no confidence by giving the film a big screen opening in only three markets: the United States, Canada, and China. For all other markets, last December, Paramount sold off international distribution rights to Netflix for half of its $55 million production budget. That means that it needs to make only $27.5 million to break even — and its first weekend puts it more than on track to meet this modest goal.

This is despite the prediction by many film analysts that Annihilation, like Arrival, a similar and highly successful Paramount film, is exactly the type of film that does well — and perhaps even better — internationally.

Indeed, Annihilation often draws comparisons to Arrival. Both films are challenging science fiction stories helmed by a female lead (in Arrival’s case, it’s Amy Adams) that explores both human contact with aliens as well as the human condition itself, all amidst a lush visual backdrop. Arrival was critically acclaimed, grossed $203 million worldwide, and was nominated for eight Oscars.

Unfortunately, Annihilation was not given the same opportunity to prove itself on the international stage, while domestically, its opening weekend has shown that it is, at the very least,meeting its modest expectations.