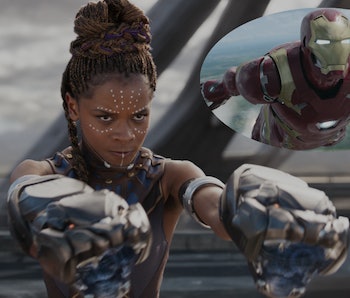 Avengers: Infinity War will bring most of the Marvel Cinematic Universe’s heroes together, many of them for the first time on-screen. One highly anticipated interaction will be the meeting of geniuses Tony Stark, Shuri, and Bruce Banner, which Black Panther actress Letitia Wright is ready for it.

Shuri was introduced in Black Panther as the brilliant sister of Wakanda’s new king T’Challa. As the country’s lead engineer, she is in charge of all the technological advancements the country is making. She also keeps her brother safe by creating his Black Panther suit and his weapons.

The upcoming Avengers will include all three characters, so a scene together is not out of the question. Black Panther ended with T’Challa sharing Wakanda’s technology with the world, which Shuri will be in charge of. The encounter would be fascinating mainly because of how Stark stubborn has been shown to be in previous MCU films. He also sees himself as the smartest person in any room.

Whichever way the encounter goes Wright will definitely bring Shuri’s joyful nature to the scene, something the actress agrees with. She did say “When people see Shuri on the screen they’re just joyful, they leave the cinema like happy, like, “Yo, she made me laugh.” to The Hollywood Reporter after all.