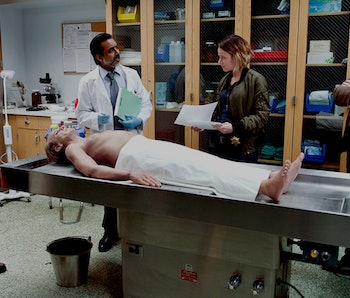 My biggest complaint from True Detective’s first episode of the new season was the show’s overpowering darkness without much substance behind it. The characters were meant to be dense, complicated, and troubled people. All we got, though, was the image, no real motivations or characterizations. Episode 2, “Night Finds You,” begins to fill in the gaps.

“Night Finds You” begins, darkly, with Frank Semyon (Vince Vaughn) lying in bed with his wife Jordan (Kelly Reilly). Frank is up early and tells Jordan about being locked in the basement as a child. His father would stash him away when he went on benders; little Frank would come out the next morning. But once, his father got arrested, and Frank was stuck in the basement for five days. In that time, he ran out of food and light and ended up mercilessly smashing a rat that was eating his finger. Frank speaks of his powerlessness. What if his father never returned? And with that, we have some real (albeit not very nuanced) motivation behind Frank’s gangster lifestyle: he’s compensating for weakness in childhood with might and violence in adulthood. The most remarkable moment of the scene, however, is Jordan’s shock and sadness. She admits she has never heard Frank’s story and wonders how many others like it he has. Childhood trauma, obviously, is not a subject broached by the long-married couple.

The rest of the episode is, for the most part, quite routine. Our three (sometimes) law-abiding protagonists, Ray Velcoro (Colin Farrell), Ani Bezzerides (Rachel McAdams), and Paul Woodrugh (Taylor Kitsch), gather to inspect Ben Caspere’s mutilated corpse. Each is taken into an office and told their role in the investigation by some higher-ups (including Michael Hyatt – Brianna Barksdale from The Wire!!). There’s some routine investigating and gap-filling. We learn that Semyon liquidated all his assets for his project with Caspere, who is now dead with his money. We find out a bit more about the strange little incorporated city of Vinci: it’s corrupt. And Woodrugh still wants to be on “the bike” because he says so.

“Night Finds You” confirms True Detective’s unrelenting commitment to noir. Season 1, though dark, was also funny, zany, and mysterious. So far, Season 2 has only the darkness. (Velcoro makes two groan-worthy “jokes” to Bezzerides during a car ride. E-cigarettes remind him of robot dicks.) The grimness is, at first, overwhelming. Literally every word uttered is heavy, mean, and sad. Ultimately, however, it is simply Nic Pizzolatto’s stylistic choice. Season 2 favors silence over exposition and explication, which is, ironically, distracting, but something that will hopefully grow into itself as it moves forward.

That Ending, Tho [Spoilers}

After a methodical episode, Pizzolatto throws us for quite the twist at the episode’s end. On a tip from Semyon, Velcoro cases Caspere’s second home before an official police investigation. Caspere’s second home, they assume, was where he brought prostitutes, and could be where he was killed. In the final moments of casing, Velcoro turns around to see a person in a bird mask, who shoots him. Velcoro drops to the ground, and the bird person stands over him, shooting him once more in the chest. The episode ends. Speculation of Velcoro’s fate will run rampant. (If nothing else, why would HBO hire Colin Farrell for only two episodes?) It may not be worthy worrying about what will happen. It may be better to ask, “why?” How does the possible killing of a character we just met fit into the show? True Detective Season 2 is cold. No character is safe. We may end up knowing more about someone once he’s dead than we did when he was here to hide his secrets.