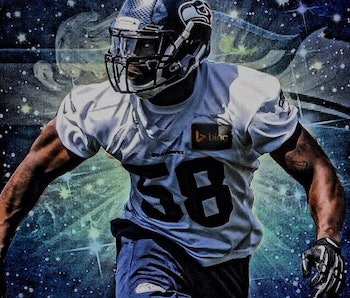 Careers rarely go according to plan. In Job Hacks, we shakedown people for the insights they cultivated on the way to the top of their fields.

How he got his start:

I originally wanted to go to the Marines, actually. I graduated from Boston College with a major in marketing, the fall of my senior year. I wanted to use that spring to train as an officer. But my family members weren’t too happy about my ambitions to join the Armed Forces. Fortunately, I’ve always worked hard, especially when it comes to athletics. Going for the NFL draft was a good plan B, and I had the opportunity.

Your Plan B was many people’s dream Plan A! Take me through what that process was like for you.

It was absolutely crazy. It’s a very strenuous process. You go to the NFL Scouting Combine — which I was fortunate enough to be invited to. They get all your information, sign a bunch of documents, then you go and get a physical. You almost feel like a slab of meat. You’re literally lying on a table, having doctors from multiple teams checking your arms, your legs, your neck. They’re using medical terms you have no idea about, they’re talking into microphones.

It was! It’s straight out of sci-fi. Then you have to weigh yourself. You’re wearing nothing but spandex, you walk onto a stage, all the coaches are there, you step onto a scale, and they announce your weight to the crowd.

Were they mostly evaluating your physical abilities then?

No, then there’s an interview process. I’ve had people go to BC and King High School, asking about me. I got in trouble in sixth grade for rough-housing one time. There was one guy at the draft who asked why I was involved in that situation. They were like, “Want to tell us about this?” I had never been suspended in my life, so I was confused. But then I looked at the school name, and I was like, “That was middle school!”

So through all this, did you have your heart set on any team in particular?

I kept an open mind. And I’m one of those outliers — I actually rarely watch NFL games. It wasn’t as exciting as college football to me. I felt like college — there were so many athletes who wanted to reach the next level. With the NFL, you’re pretty much at that level, so there are some games where you see guys not try or work as hard. Also, the separation of talent can create an exciting atmosphere.

But I was very excited to get the call. I remember it was May 12th of 2014. I got a call from a 425 number, and I didn’t think it was them, because other teams had seemed more interested. The general manager was on the phone. He said, “How’s it going, Kevin. This is John Schneider. Would you like to be a Seahawk?” The next day, I was at the airport with everything I owned, flying out to a state I’d never been to before.

It’s a lot of hard work. I get to the facility around 6:30 a.m. and don’t leave until 6:30 or 7:00 at night. It’s great to be selected, but you still have to earn your spot on the team. It’s important during your off season to get out a little bit, because being in the NFL can be very stressful. But I’m in a fortunate position because the Seahawks are a great team, and everyone is willing to help everyone.

Did you find that there was a learning curve to adapting to life as a professional athlete?

I definitely learned the difference between college and the NFL. College is a community; you’ll go out with your teammates after a game. With the NFL, you have guys on the team with other responsibilities — marriage, kids—and you have to conduct yourself as a professional. Playing professionally is about making sacrifices. If you’d like to go out and party, there’s consequences. Some guys don’t see the consequences immediately, some do. It’s all about the choices you make. The coaches won’t baby you. They don’t care what you do outside, as long as you don’t embarrass them.

Speaking of embarrassing, it’s been quite a year for the NFL, between scandals like Deflategate and Ray Rice. What has that been like, to have your rookie year during a time when there’s been a lot of negative press? Have you felt the effect of it?

I’ve definitely felt it a little. It’s kind of funny when I look at the TV and they’re talking about a guy who’s sitting right next to me in the cafeteria. Being a part of the NFL team — it’s tagged to you. If one person misrepresents the NFL, we’re all affected, because people might think all players are like that. It can affect you, but what we like to say on the team is just control what you can control. If you’re a pro athlete, you’re in the spotlight.

Did anything in your life prepare you for the spotlight?

It’s not really a thing you can prepare for. You just need to focus on representing yourself well. [Not only to the media]. When I first came to Seattle, we were put in hotels. I ordered pizza and the guy delivered it, and I gave him a good tip. He posted it on Twitter and tagged me in it and said I was a nice guy. So you just never know. When I’m in public, I act as though I’m just the average Joe walking around—which is what I believe myself to be — but I do sometimes get recognized. I’m not one of those very high-profile guys yet, but sometimes people come up to me. If I’m out in public and someone says hi, I always greet them politely.

Going back to the media for a moment, have you found that you had any preconceived notions about your teammates — maybe from seeing them on TV before — that were proven wrong?

I try to go in without judgment. But the media looks at Richard Sherman in the way they do — which is a negative way — and I didn’t judge him before, but I definitely realized he’s a great guy. One of the funniest on the team. Also, Marshawn Lynch is a great teammate, he just personally doesn’t like speaking to the media, which I can understand. Every Tuesday, he goes back to Oakland and gives back to his community and has fundraisers, but the media doesn’t want to talk about that. A learning curve was definitely figuring out that they pick and choose how to represent a player. Just like there can be players that misrepresent themselves, there’s media too. It’s tough to know who’s who.

Do you think being good at the sport itself is just one facet of succeeding as a pro athlete?

Being a pro athlete is about creating a plan for yourself. A sport like football, for example. If you play for 10 years, you’ll be 32 years old when you finish. If you don’t conduct yourself well and set yourself up for a life after football, you’ll have issues, because you’ll still have a lot of life to live after that.

What do you mean by “set yourself up”? Are you doing that?

Well, as a student-athlete in college — especially a scholarship athlete — I couldn’t do summer internships, because I was busy doing summer workouts. But then there’s nothing to make you more appealing to the real world other than playing a sport. That only holds so much weight. Even being an NFL player, you can’t go to Apple and say “Can you hire me?” They’ll ask what else you can do. That’s why I’m doing some of the things I’m doing. I’ve been networking, going to events, using LinkedIn. I’ve been trying to figure out what I don’t know. It’s important to do that now.

More like this
Culture
Feb. 3, 2023
A Lot of ‘80s Sci-fi is Dated. Videodrome Feels More Relevant Than Ever.
By Chrishaun Baker
Culture
21 hours ago
Signs is Remembered as M. Night Shyamalan’s Alien Movie, but it Has a Human Heart
By Mónica Marie Zorrilla
Culture
Feb. 2, 2023
After Harry Potter, Daniel Radcliffe Obviously Had to Play a Farting Corpse
By Alex Welch
LEARN SOMETHING NEW EVERY DAY.
Share: