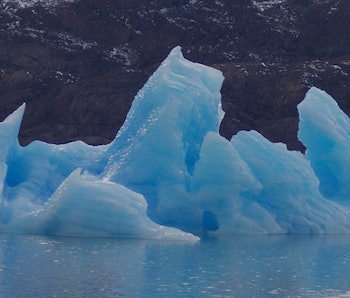 A picture of a bright blue iceberg floating in a South American lake is making its rounds on the internet, leaving people very confused. No, it’s not a big piece of trash; blue ice is real, and it’s cool as heck.

The photo was tweeted on Tuesday by Jia Tolentino, a staff writer at The New Yorker, with the caption: “This piece of glacier ice in Patagonia looks like a super tight computer error.”

The piece of ice does look totally out of place, as this hue of blue doesn’t look like something you’d typically observe in nature. It’s no glitch in the matrix, though. In fact, if you’re fortunate enough to see a blue iceberg, what you’re seeing is a chunk of ice that is hundreds — possibly thousands — of years old.

The bit of ice sticking out of the water is often the part that had been previously submerged. What most likely happened with this iceberg is that the top melted until the whole thing flipped over, exposing the belly of the iceberg.

But the reason it has such an otherworldly shade of blue has to do with the density of the ice and its ability to refract light.

When you think of an iceberg, you probably think of a big, white piece of ice. That’s often true, as the ice near the surface of an iceberg has many airspaces, which creates a multitude of different surfaces off which light can reflect. Because of this, the iceberg reflects all wavelengths of light, making it look white.

But beneath the white surface is ice that has been under tremendous pressure for a very long time. That pressure makes ice denser and denser, pushing out air bubbles. As a result, the ice has fewer surfaces for light to bounce off of, and therefore does not treat all wavelengths of light equally.

Just as water absorbs light that is closer to the red end of the visible spectrum, so do dense icebergs. And since a dense iceberg absorbs red light, it also reflects blue light, which is why the dense iceberg looks blue. This effect, called Rayleigh scattering, is also responsible for the sky looking blue to us. The water molecules in the iceberg refract the sunlight that enters the iceberg, making the light that exits appear only at shorter — and bluer — wavelengths.

If you liked this article, check out this video where Bill Nye predicts the future of the environment.

More like this
Science
8.3.2022 12:15 PM
Look: 7 Great Salt Lake images reveal how shockingly fast its shrinking
By Jennifer Walter
Science
8.12.2022 12:30 PM
Astronomers pinpoint the source of a mysterious cosmic particle
By Kiona Smith
Science
8.6.2022 5:00 PM
Earth is spinning too fast — the consequences for timekeeping may be unprecedented
By Andrew Moseman
Related Tags
Share: