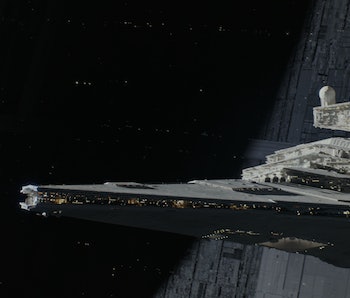 By now, we all know the Millennium Falcon will sporting a different look in Solo: A Star Wars Story, which is partially inspired by retro Ralph McQuarrie production design paintings from the Seventies. But, there’s another retro spaceship design making a comeback, and it’s not even from McQuarrie’s old concepts, nor does it really look much like other Star Wars ships at all.

On Monday, fans started noticing images for toy versions of new ships for Solo, including the Arrestor Cruiser. Looking like something straight out of 2001: A Space Odyssey, the Arrestor Cruiser is based on a design by artist Colin Cantwell. Cantwell is the guy responsible for the way X-Wings, TIE Fighters and the Death Star actually ended-up looking. On his Instagram, Cantwell confirmed the “new” Arrestor Cruiser was based on his early design for the Star Destroyer. Cantwell said he designed the ships around “the function of the impact on the viewer,” implying we might not want to think too hard about how these spaceships work, even though we’re totally going to anyway.

Here’s the forthcoming toy for the Arrestor Cruiser, along with another ship called an Imperial Hauler.

The exact role the Arrestor Cruiser will play in Solo is still unknown. In fact, in the film, it may not end up being an Imperial ship at all. Instead, the ship could have something to with Tobias Beckett (Woody Harrelson) or some other as yet unseen character. In the old Brian Daley Han Solo novels, Star Destroyer-esque ships were used by an organization called the Corporate Authority, which was not the Empire, but kind of acted like it. Who knows, maybe Solo will reboot non-Imperial antagonists for the new film.

Either way, this ship design is a good reminder of just how many different people’s artistic and design concepts went into Star Wars in the first place.

Solo: A Star Wars Story is out everywhere on May 25.