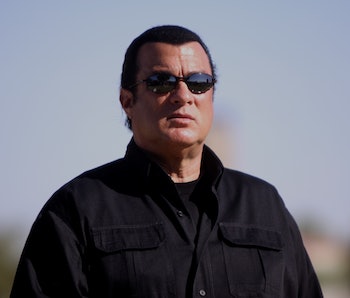 This is a new one: Steven Seagal has thrown his name behind a cryptocurrency called “Bitcoiin 2Gen” — yes, with two i’s — a project with a strangely familiar name and even stranger technical details. Perhaps the most baffling aspect of the project, beyond its questionable contributions to the crypto-world, is the fact that it uses a pyramid chart to explain its reward scheme. Really.

In a press release sent out last week, the project quoted Seagal as mentioning an old Chinese saying from the philosopher Chuang Tsu: “Flow with whatever may happen and let your mind be free. Stay centered by accepting whatever you are doing. This is the ultimate.” The release suggests that Seagal’s endorsement was influenced by his Zen teaching background:

As a Buddhist, Zen teacher, and healer, Steven lives by the principles that the development of the physical self is essential to protect the spiritual man. He believes that what he does in his life is about leading people into contemplation to wake them up and enlighten them in some manner. These are precisely the objectives of the Bitcoiin2Gen to empower the community by providing a decentralized P2P payment system with its own wallet, mining ecosystem and robust blockchain platform without the need of any third party.

The cryptocurrency market is rammed with accusations of scams, but while projects like Litecoin Cash have faced criticism for their naming choices, there’s at least solid technical details in such projects. Bitcoiin2Gen takes a different tack.

It claims to improve on Satoshi Nakamoto’s 2008 cryptocurrency with a faster, safer approach, but its white paper offers little details on how it plans to do that. What we do know is that, despite its Bitcoin-inspired name, it actually plans to use the Ethereum blockchain. CoinDesk notes the site’s domain name was registered to a Panama address in 2015, with ownership changing hands early January.

While its lack of technical information, obscure ownership and questionable claims are all enough to set alarm bells ringing, the cryptocurrency’s initial coin offering that started on February 5 is what definitely raises red flags. There’s a four-level commission structure for miners that join through the accreditation program, with the rewards outlined in an actual, real-life pyramid chart.

Seagal is no stranger to unconventional projects. The Exit Wounds and Under Siege star has previously supported the Russia 2045 team aiming to create robotic avatars for a transhumanist future, while his Lightning Bolt energy drink featured Seagal’s face on the front, sold with the promise of “100 percent pure Steven Seagal Juice.”

But with the Securities and Exchanges Commission warning last November about the dangers of celebrity endorsements, Seagal’s latest idea may well be Half Past Dead.