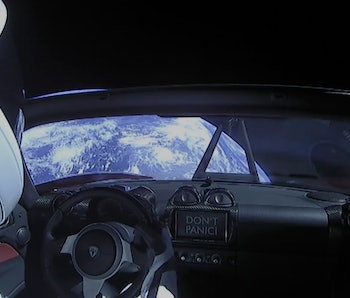 A little more than a week after the successful maiden launch of SpaceX’s Falcon Heavy rocket, its payload — Elon Musk’s Tesla Roadster with a dummy known as Starman in the driver’s seat — is already nearly 1.7 million miles from Earth on its way to Mars. That’s just the tiniest fraction of a space odyssey that figures to last millions of years — but how will the journey end?

That’s the question physicists at the University of Toronto set out to answer in a paper posted to the preprint site arXiv. Running a huge number of simulations, they found that Starman will likely remain in space for several million years, but the odds are very good that it will eventually smash back into Earth.

In theory, the Roadster’s orbit is meant to keep it traveling indefinitely in an eccentric orbit around the sun, with it moving between Earth’s and Mars’s orbits in what is known as a Hohmann transfer. But the gravity of all the much larger objects in the solar system will distort its trajectory over time, increasing the likelihood that one of its close encounters with various planets will eventually end in a collision.

That said, it should be fine for a good long while. The simulations found that there’s only a six percent chance it hits Earth in the next million years. The next likeliest target isn’t Mars, as you might expect, but rather our other neighbor, Venus, with which there’s a 2.5 percent chance of collision. The simulation found several close calls with the red planet, but the Roadster never impacted Mars, though it did hit the sun in exactly one of the simulations.

The odds of eventual collision only go up with time, but more slowly after that. It’s still only an 11 percent chance of collision with Earth in the next 3 million years. The paper calculates a half-life for the Roadster of about 20 millions years before it eventually hits something, with Earth remaining the likeliest target of the bunch. If and when the Roadster does hit Earth, don’t expect it to make too much of an impression. It’s small enough that it would just burn up in reentry.

Though the simulations didn’t turn up anything in the first 3 million years, it’s possible it will eventually hit Mars. That would surely be the most appropriate destination, irrespective of whether any descendants of Elon Musk’s planned Martian settlement are around to witness the show.