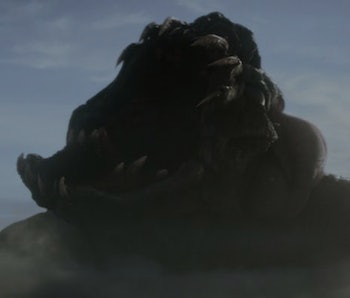 The nature of the Cloverfield film universe is about as heady and confusing as it’s mixed sci-fi elements. Many fans were suspicious that the Cloverfield universe was closer to a multiverse, but the events and ending of The Cloverfield Paradox confirm that each film takes place in a different reality. The enormous monster we see in the films final moments only further proves it.

Up until the very last moments of Cloverfield Paradox, we don’t exactly know what’s happening down on Earth. Most of the film’s action focuses on the hellish body horror aboard the Cloverfield space station and Ava Hamilton’s desperate attempts to fix the titular paradox.

But we learn fairly early from her husband Michael’s point of view that the Shepard particle accelerator’s malfunction did more than send the station into an alternate reality. It also seemingly spawned some kind of large-scale destruction on the ground. We never see any kind of monster, and we never get confirmation of where the Hamilton’s live (British accents aside), but Michael sees buildings obliterated and is so afraid that he hides out in a friend’s fallout shelter.

On some thematic level, these scenes on Earth are supposed to resonate deeply with what we’ve seen in the previous two Cloverfield movies: a monster destroying a city and two people hiding in a shelter obviously reference Cloverfield and 10 Cloverfield Lane. We’re almost confused. Is this in New York City? Is this the same monster from the first movie? Could this possibly even be the same shelter from the second movie?

Michael’s contact tells him at the very end that Ava’s escape pod will crash down somewhere near the “Delaware coast.” His response: “Have you lost your mind?”

Her pod lands somewhere in the Atlantic Ocean, not all that far from this monstrous beast:

We might jump to the conclusion that this is the same monster from the first movie.

After all, that was 2008 and this is 2028. Maybe the cataclysmic event transported it to this new world decades after it destroyed another Earth. It had a chance to grow up, so it looks a little bit different.

Maybe, but probably not.

The original Cloverfield monster is estimated to be 180 feet tall with a leaner, more spider-like body. This new one stands taller than the clouds over the ocean, and if it’s standing then you can bet a large portion of its body is underwater. They’re probably a similar subspecies or even different stages in the evolution of the same creature, but they’re almost certainly different.

When Michael’s shouting at his contact, he wonders why they’re “having her come back to those things.” We can’t know for sure, but the original Cloverfield seemed like an isolated incident. In the Cloverfield Paradox universe, we’re dealing with something closer to Pacific Rim, where multiple monsters emerged through some rift.

The Cloverfield Paradox answered a lot of questions about this growing franchise. The Shepard particle accelerator ripped a hole in reality, shattering space-time across dimensions. But amidst the many lingering presented by the franchise, we still have no idea about one thing:

Where do these monsters come from?

The Cloverfield Paradox is currently available to stream on Netflix.

Relive one of The Cloverfield Paradox’s most disturbing moments: