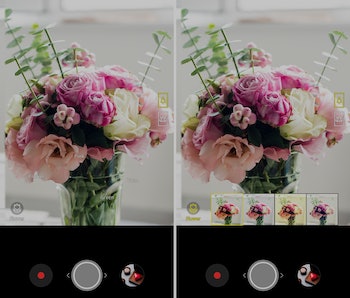 LG is set to release a smartphone with an even smarter camera. On Tuesday, the company announced plans to unveil the 2018 edition of its V30 flagship phone at Barcelona’s Mobile World Congress, with a new set of artificial intelligence features to change how the device captures images and add in new voice commands.

The “Vision A.I.” software forms part of LG’s efforts over the past year to bring A.I. to gadgets in areas where it makes sense, making the user interface easier to use rather than tacking on hidden extra apps. In the case of the camera, the system focuses on three major enhancements: identifying the scene, improving low-light photos by a factor of two, and smart image recognition for scanning QR codes or searching the web for an image.

In the case of scene identification, LG teamed up with a third party to feed over 100 million images into the system. The “Vision A.I.” has over 1,000 internal categorizations used to choose between one of eight modes: portrait, food, pet, landscape, city, flower, sunrise, and sunset. In food mode, for example, the system boosts the sharpness and warms the colors to make the subject look nicer.

The company is also expanding its existing list of exclusive Google Assistant voice commands. This stands in contrast to Samsung’s approach of the Bixby system offering features in parallel to Google Assistant. Snappers using the new edition of the V30 will be able to invoke the following features using as-yet unnanounced orders after the trigger word “OK Google”:

These nine new commands are in addition to the 23 orders already supported on the 2017 model:

If LG has its way, we may end up talking to our cameras instead of pressing buttons. Hopefully when it unveils the feature in Barcelona, it works a tad smoother than its robot unveil at the Consumer Electronics Show.

More like this
Innovation
10 hours ago
“Quantum materials” could give the human brain a run for its money, scientists say
By Nathaniel Scharping
Innovation
8.5.2022 11:00 AM
Alexa could diagnose Alzheimer’s and other brain conditions — should it?
By Joanna Thompson
Innovation
7.29.2022 2:00 PM
Amazon's new invention could let you “speak” to the dead — but should it?
By Sofia Quaglia
Related Tags
Share: