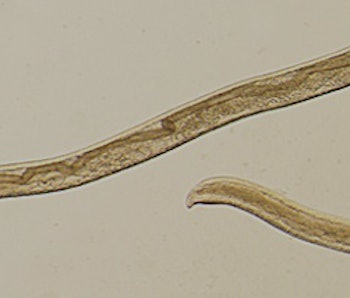 Monumental firsts are usually good things. The first dogs in space? Heck yeah. SpaceX’s first spy satellite mission? Maybe a dubious honor, but still a significant achievement. But how about the first person to get infected by parasitic worms that are usually only found in cows? Now that’s a really crappy first.

That’s what happened to Oregon resident Abby Beckley, whose medical case report was published Monday in The American Journal of Tropical Medicine and Hygiene. In the report, doctors outline how they removed 14 Thelazia gulosa worms from the now-28-year-old woman’s eye. While other members of the Thelazia genus have been found in humans in Asia and Europe, this is the first time that T. gulosa, which usually is only found in cows’ eyes, had been observed in a human.

Warning: There’s a graphic photo farther down in this article. You have been warned.

“Cases of eye worm parasitic infections are rare in the USA, and this case turned out to be a species of the Thelazia that had never been reported in humans,” said first author Richard Bradbury, Ph.D., of the CDC’s Division of Parasitic Diseases and Malaria, in a statement. “Previously, it was thought that there were only two different species of these (Thelazia) eye worms that infected humans worldwide. Now, we have to add Thelazia gulosa, a third one to the list.”

Beckley tells Buzzfeed News that she first discovered something was wrong while she was working on a salmon boat in Alaska in 2016. At first, she thought an eyelash had gotten stuck in her eye, but after more than a week of worsening symptoms, and when rinsing it didn’t work, she picked at her eye. She pulled out a tiny worm.

She went to a doctor, who found two more worms. The next day, she went to an optometrist, who found three more. Ophthalmologists tried to wash her eye, but no more came out. Nonetheless, Beckley continued to remove worms from her own eye over the next couple weeks, ending up with a grand total of 14 worms.

Beckley told doctors she’d been riding horses in Gold Beach, Oregon, before her work on the fishing boat. Doctors suspect that this area, which is home to lots of cattle, is where she was infected, probably by a fly known as a “face fly,” that carries the worms.

“We immediately thought it could be Thelazia californiensis because that is the only species that was known to infect humans in the U.S.,” said Bradbury. “It was only after we looked more carefully that we realized some differences in anatomy that meant it could not be T. californiensis. We had to go back to papers published in German back in 1928 to help identify this worm as Thelazia gulosa.”

T. gulosa is found in the northern U.S. and southern Canada, and it’s spread by the face flies, which feed on cows’ tears.

Now for the image you’ve been waiting for: Here’s what the worm looked like in Beckley’s eye.

Since she removed worm number 14 from her eye, Beckley has not reported any further worms. But now that CDC scientists know that there’s another species of eye worm that can infect humans and that it lives in the U.S., they should be able to help identify it quickly when other people start experiencing the same problem that Beckley did.