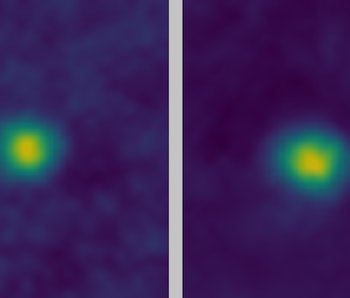 Both of those blurry blobs above might look like a reading from a submarine radar, but they’re actually record-breaking space snapshots.

These images were taken on December 2017 by NASA’s New Horizons spacecraft, while it was 3.79 billion miles away from Earth. They depict two objects in the Kuiper Belt — the region beyond the orbit of Neptune that is believed to contain comets, asteroids, and smaller icy bodies. These two false-color images of Kuiper Belt objects (KBOs) are now the farthest images from Earth ever taken by a probe.

This snapshot of the cosmos is even farther than the famous 1990 picture of Earth — known as the “Pale Blue Dot” — taken by NASA’s Voyager 1 when it was 3.75 billion miles away. With these new images, With these new images, New Horizons has lived up to its name and has cast our gaze even deeper into the universe.

The spacecraft, launched back in 2006, is destined for the edge of the solar system, where it will help astronomers get a better look at the icy objects and rocky formations that reside there. Its first big moment came when it underwent a six-month-long flyby study of Pluto and its moons in the summer of 2015. The craft sent back never-before-seen closeups of the dwarf planet, which gave astronomers all new insights regarding the surface of the distant celestial object.

From there, New Horizon continued onwards to where it snapped the pictures of the two KBOs seen above. The probe is currently in hibernation until June 4 as it continues to travel 700,000 miles of space every day.

Congrats in advance to New Horizons for smashing all those records!