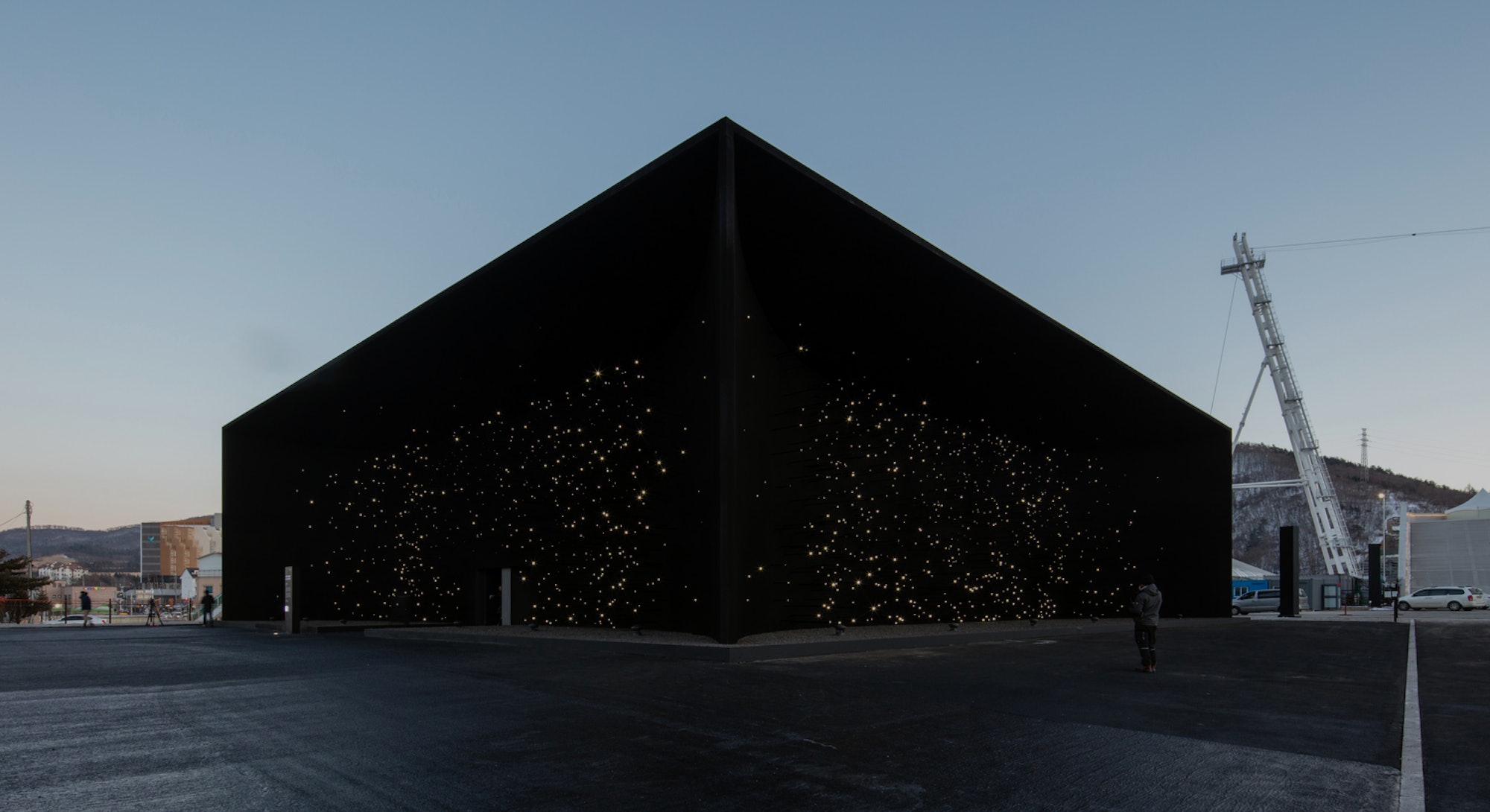 While most athletes and spectators are thinking of bronze, silver, and gold, there’s a new color garnering attention in PyeongChang right now — black. Vantablack, more precisely.

With the 2018 Olympic Games set to officially kick off Friday, London-based architecture firm Asif Khan unveiled their pavilion for the Olympic Plaza, dubbed “the darkest building on Earth.”

By coating the exterior in layers of Vantablack VBx2, a super-black spray paint that absorbs over 99 percent of light, the jaw-dropping pavilion gives the illusion of staring into a black hole.

Vantablack isn’t actually a “paint,” per se. It’s made up of millions of 20 nanometer-wide carbon tubes (about 3,500 times smaller in diameter than a human hair), each between 14 and 50 microns long, placed next to each other into what manufacturer Surrey NanoSystems calls a “a functionalised forest.”

In a one centimeter-squared surface area, there are about 1,000 million nanotubes. The tubes are grown in a specially designed chemical vapor deposition chamber under lamps that keeps the surface temperature at around 806 degrees Farenheit.

When light strikes a surface coated in Vantablack, it is absorbed between the nanotubes and, because there are so many of those little guys packed into a small area, the light bounces from tube to tube rather than reflecting back out.

Surrey NanoSystems created a spray-on version of Vantablack known as VBx2 that can be used to cover larger surfaces, creating unique spaces on a more sizable scale than ever before possible.

Though the Olympic pavilion appears to have a flat-walled exterior, it’s actually a curved, parabolic surface that is covered in rods of varying lengths. Each rod has been sprayed with Vantablack VBx2. The rods each contain a small light which juts out at viewers from different depths, bringing you about as close as possible to feeling like a Starman gazing at celestial wonder while still keeping your feet on the earth.

“From a distance the structure has the appearance of a window looking into the depths of outer space,” Asif Khan said in a statement. “As you approach it, this impression grows to fill your entire field of view. So on entering the building, it feels as though you are being absorbed into a cloud of blackness.”

After entering what feels like a void of time and space, visitors continue into the pavilion and are transported to an opposing world of bright, white light. The room contains a hydrophobic water installation, also by Asif Khan, that produces 25,000 water droplets per minute.

The droplets, whose rhythm is triggered by haptic sensors set off by visitors, travel along engraved pathways on the floor and collect into a central pool. “I wanted to move from the scale of the cosmos to the scale of water droplets in a few steps,” Khan explained. “The droplets contain the same hydrogen from the beginning of the universe as the stars.”

The pavilion was commissioned by Hyundai Motor and officially opens February 9th. Asif Khan previously created the Coca Cola pavilion at the 2012 London Olympic Games and the MegaFaces pavilion at the 2014 Sochi Winter Olympics, but his 2018 Pyeongchang pavilion is definitely the gold medal winner of the bunch.