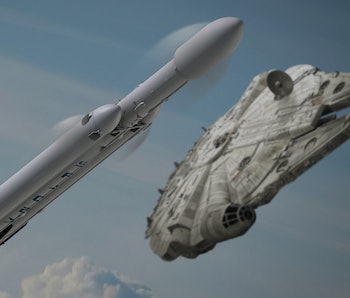 History was made in the exact same week for two spaceships called “Falcon.”

On Tuesday, SpaceX successfully launched the Falcon Heavy rocket into space, proving its viability as a reliable space transportation system for the future. And just 24 hours prior to the launch, the trailers for Solo: A Star Wars Story revealed what the starship the Millennium Falcon looked like before it appeared in the first Star Wars movie. But, which of these two space falcons is heavier? The real-life Falcon Heavy or the fictional Millennium Falcon? It depends on how you look at it.

Back in December 2017, Star Wars: The Last Jedi ended with over a dozen people hanging out on the Millennium Falcon, which didn’t prevent it from lifting off from the salt-covered, red planet Crait planet Crait. And that’s because it can carry quite a big load, a load that is perhaps slightly more than what the SpaceX Heavy Falcon can lift.

According to the SpaceX website, the Heavy Falcon can carry up to 64 metric tons, which is about 141,000 pounds; “A mass greater than a 737 jetliner loaded with passengers, crew, luggage, and fuel.” The Falcon Heavy is 70 meters tall (or long) which makes it twice the size of the Millennium Falcon, which is only 34.5 meters. But, even though its like half the size, the Millennium Falcon can probably carry more than the Falcon Heavy.

According to current Star Wars canon, the Millennium Falcon is a modified YT-1300f Correllian Light Freighter, and it has a cargo capacity of 25-100 metric tons. Why the big range? Well, presumably, the “special modifications” Han Solo made prior to the first Star Wars movie gave him extra storage space. The “factory settings” for the YT-1300f are probably 25 metric tons, but after Han does his custom job on the ship, the “heaviness” of his Falcon increases.

What this means is that the slicker, newer Millennium Falcon in Solo probably has the smaller weight capacity, meaning, the next version of the famous fictional spaceship seen in Solo won’t be near as heavy as the SpaceX Falcon Heavy. But, the more recognizable Millennium Falcon in the classic Star Wars trilogy, The Force Awakens and The Last Jedi is totally heavier than the Falcon Heavy.

So, now the question is this: how is Millennium Falcon capable of carrying so much weight despite being half the size of the Falcon Heavy? Presumably, Elon Musk’s people at SpaceX are working on that.