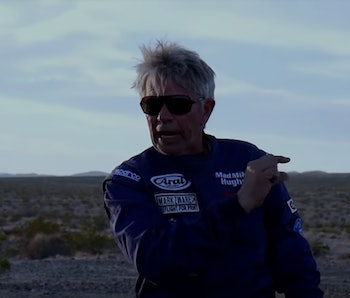 In a crushing blow to his ego, Michael “Mad Mike” Hughes has once again failed to launch his rocket for flat Earth “research.”

The 61-year-old limo driver previously gained notoriety when he attempted to blast off in the rocket back in November 2017 — a mission he called off at the last minute. This time, Hughes says a problem with the rocket’s actuator caused its ignition to malfunction. Since he wholeheartedly seems to believe the Earth is not round — a fact proven time and again in infinite permutations — it’s hard to say if Hughes actually knows what’s going on with his rocket.

“I’m sorry to disappoint everyone; I did the best I can do,” Hughes says in a video statement released after the failed launch. “I manned up. I got in it.”

“I know about aerodynamics and fluid dynamics and how things move through the air, about the certain size of rocket nozzles and thrust,” he told the Associated Press in November 2017. “But that’s not science; that’s just a formula. There’s no difference between science and science fiction.”

It seems after this latest failed attempt, Hughes might be out of the game for good, which would undoubtedly disappoint his sponsors, a group called Research Flat Earth. In addition to technical difficulties with the rocket, Hughes told reporters on Monday that he is suing the governor of California and several public officials, which would complicate his plans for another attempt.

Maybe Hughes’s current outlook is best summarized in this quote he recently gave to the press:

More like this
Innovation
18 hours ago
Indoor lights make us sick — this technology could fix that
By Miriam Fauzia
Innovation
17 hours ago
Will Miami exist in 2050? 4 strategies could keep U.S. coastal cities afloat
By James Gaines
Innovation
8.11.2022 11:00 AM
“Quantum materials” could give the human brain a run for its money, scientists say
By Nathaniel Scharping
Share: