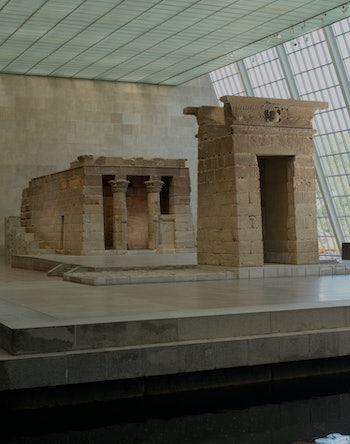 Henettawy died when she was 21 years old. As a chantress of the deity Amun-Re in Ancient Egypt, Henettawy sang to the gods in exchange for divine favor. Upon her death, she was given a modest burial — three nested coffins, painted with a dazzling array of hieroglyphics and scenes from the afterlife.

Today, Henettawy’s vessel is on display in the Metropolitan Museum in New York City. It can also be seen on the Met’s website, where centuries of knowledge have been consolidated into a vast library of artifacts, all available for perusal from a computer.

“When people think of a museum, they generally think of the big marble building,” Blaire Moskowitz, a Ph.D candidate at the University of Leicester’s School of Museum Studies, tells Inverse. “But there’s always a digital counterpart in the world we live in today.”

The Met’s digital counterpart, their online collection, contains 451,090 artifacts. And it’s more than just an extension of the Met. It’s a digital museum; an institution all of its own.

The Metropolitan Museum now recognizes digital visitorship as an important constituency. Last year, their website had 31 million visitors, and they made 375,000 images available for public use (including all of the artworks in this story). Other museums have followed their lead and ramped up their online presence. Recently, the Rijksmuseum digitized more than 600,000 images, and the Los Angeles County Museum of Art has more than 90,000 images available in their digital collections.

The digital museum has given rise to a new field, a new type of museum specialist who thinks about how to use the internet to improve the the public’s ability to appreciate the priceless works in their collections.

Moskowitz is a member of this cohort. She studies the intersection between museums and what she calls “the expert web.” Loosely-defined, the expert web is a collection of online communities, forums and subreddits that come together to discuss a niche topic, like toys or taxidermy. Her academic focus has made Moskowitz a keen noticer of trends.

“I see tons of things through the eyes of a museum,” she says.

At their most basic function, digital museums are important hubs of logistical information that help bring people to their physical locations.

But in a greater sense, they also serve as massive online galleries that bring museums to people. Museums also use their websites to engage with volunteers, sometimes asking them to transcribe handwritten letters of historical interest in order to add them to the digital archive, among other museum projects. All you to participate in the preservation of a shared history and culture need is an internet connection.

Net neutrality’s repeal could threaten all that. While it’s not yet clear how the internet will change as a result of deregulation, there are a couple ways it could go down.

ISPs could decide to follow the cable television model, and sell internet packages. In this scenario, Moskowitz says, museum websites might end up as part of a culture bundle, or as part of a local package. That means patrons could be required to pay extra if they want to access the digital collections that museums have up until now made available for free.

ISPs might also establish “fast lanes” and “slow lanes” for internet service. Companies that can afford to pay more to service providers could get preferential treatment, and others could receive inferior service.

When the FCC was considering net neutrality regulations back in 2014, Koven J. Smith, the former manager of digital initiatives at the Met, documented his concerns about what a pay-to-play system could do to museums.

“The ability of an institution to generate attention via online channels and the financial health of that institution are tightly coupled,” Smith wrote.

In other words, if museums end up in an internet “slow lane,” it could substantially damage their ability to garner attention and engage with potential visitors. In turn, this could lead to decreased public interest, fewer visitors, and financial instability.

Without net neutrality, ISPs could essentially become information gatekeepers, because they now have the authority to dictate the cost of different types of content. They may even choose to block entire websites. It’s possible that ISPs could attempt to shape museum content in exchange for making their websites widely accessible. This is especially concerning for museums that cover politically contentious material.

The Armenian Genocide Museum of America, for example, is a solely digital museum dedicated to telling the largely ignored story of the Armenian Genocide. This museum can’t exist without espousing a political position, and given that it exists only on the internet, ISPs have immense power to potentially control its fate.

According to Moskowitz, one thing museums can do now is stay apprised of how ISPs shift their policies. Because we may not know how the internet will change for some time, museums should also turn their attention to making contingency plans. That could mean setting aside some money now in case it’s necessary to pay ISPs in the future, or figuring out ways to bring in new visitors without using the museum’s website. Unfortunately, this is easier said than done.