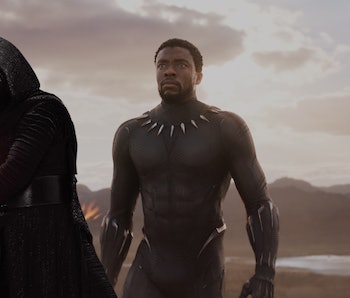 The saga continues: A contingent of disgruntled “fans” has made new plans to undermine everything Disney by organizing a campaign to give Black Panther bad reviews on Rotten Tomatoes and by spoiling the movie for “Marvel fanboys.”

On Wednesday, the belligerent Facebook group called “Down With Disney’s Treatment of Franchises and its Fanboys” resurfaced and organized a new event scheduled for February 15 — the same day that Black Panther releases — called “Give Black Panther a Rotten Audience Score on Rotten Tomatoes.”

Much of this community’s language involves bashing “SJWs,” citing conspiratorial claims that Disney engaged in “corporate manipulations which created falsified bad press for the DCEU.”

As of this writing 3,700 Facebook users are “going” to this event with another 1,800 “interested.” Despite the supposedly large amount of interest, the vast majority of comments and Facebook user engagement comes from people writing negative comments about the event itself.

To be clear, this is the same group that took credit for degrading the Rotten Tomatoes audience score for Star Wars: The Last Jedi back in December, which supposedly led to the huge gap in ratings between critics and the wider public.

Whereas previous efforts related to The Last Jedi involved spam bots that negatively rated the movie, this new effort against Black Panther involves distributing spoilers to targeted “Marvel fanboys” and leveraging DC fans to also add their own negative reviews to the movie.

The group’s leader told Inverse that they’re acting out against Disney’s supposed efforts to “shove SJW messages down our throats,” adding that “minorities … should stay that way.”

But also: “People didn’t want Luke Skywalker to be nerfed in favor of MaRey Sue.

The true motives for their upcoming attempt at Black Panther sabotage have become a bit clearer. This particular group isn’t just pro-DC, anti-Disney, or enraged nerds upset that Darth Revan is no longer canon. The fundamental nature of their very mission is inherently sexist, racist, and bigoted in every sense of the word.

But hey, if recent ticket sales numbers for Black Panther are any indication, then none of this will really matter when fans swarm into theaters in a few weeks.

Following a flurry of media coverage and activity since the event’s creation, the group’s manager also created similar events aimed at Infinity War and the upcoming Solo film, so we have those to look forward to later this year.