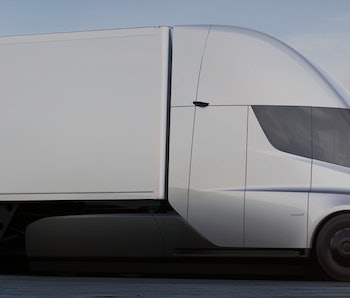 Tesla is letting some of its customers race around in one of its very own electric trucks. The Tesla Semi isn’t set to hit the roads until next year at the earliest, but Elon Musk’s firm is rewarding fans with a raffle entry for encouraging their friends to buy the company’s electric trucks.

Electrek reported Thursday that the Tesla referral program, which hands out prizes to people depending on how many others they persuade to buy a Tesla, has expanded ahead of the truck’s launch. Prior to the truck’s launch, set to retail at $150,000 for the basic 300-mile edition, buyers will be able to enter a raffle to race the vehicle that has already signed up support from big names like DHL and Wal-Mart.

And that’s it! Tesla’s marketing literature hints at “additional prizes and trophies for the best track times,” so it may be best to work on your racing abilities with your existing Tesla. Musk told investors in June 2017 that early prototypes of the truck handle “like a sports car,” so this may help you prep for when the big day comes. Owners will be able to track their lap times and compare to other winners through the Tesla smartphone app.

There’s several other incentives for owners that persuade their friends to buy a Tesla. When using a referral code, the buyer will receive unlimited access to the supercharger network, the power points that provide up to 120 kilowatts to cut recharge times down to around half an hour. Owners will receive a tiered number of rewards depending on how many people they sign up.

If you want to buy a Model 3, though, production delays mean you may be waiting a while.

More like this
Innovation
23 hours ago
Artificial photosynthesis can grow plants without light — and may solve a planetary dilemma
By Steph Lee
Innovation
6.25.2022 10:00 AM
9 veggies that are healthier cooked than raw
By Laura Brown and The Conversation
Innovation
6.24.2022 5:00 AM
Beam-steering radio technology could help autonomous cars finally hit the road
By Sascha Brodsky
Related Tags
Share: