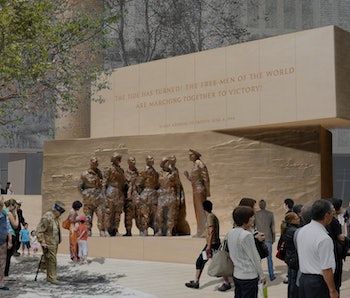 There has been considerable backlash against Frank Gehry’s plans for a rather extravagant Dwight D. Eisenhower Memorial. If all goes according to plan, the design alone will likely cost around $100 million, and the whole project (including construction, labor, etc.) will cost somewhere in the neighborhood of $144 million. As Roll Call reports, legislators would like to see a much lower price tag, but the consistent motivation has been the Eisenhower family’s wishes.

Idaho Republican congressman Mike Simpson, although not in favor of the steep cost, put the Eisenhowers first when asked about the possibility of abandoning Gehry’s project in favor of something cheaper. Said Simpson, “I’m even more concerned about going on with a design that’s not supported widely by the Eisenhower family and Congress” than how much it’ll cost. Simpson, here, flashed a degree of altruism, that the memorial may be more important than dollars and cents.

Government spending is a perennially contentious issue. There are arguments to be made for both sides, but a memorial doesn’t put food in mouths. Still, the benefits of a grand monument (designed by a world famous architect) are not inconsiderable. Nationalism is very real and very present in the United States, and people’s daily lives are improved when they are proud of their country.

Building a new presidential memorial would (in theory, at least) also increase tourism, offsetting the costs of construction. According to 2013 visitor statistics from Destination DC (Washington’s private, non-profit marketing corporation), each visitor adds about $294 to the gross city product, and every 258 visitors create a new job in D.C. In 2011, the Lincoln Memorial attracted 5.4 million visitors and the FDR Memorial attracted 2.3 million. Destination DC also predicts a continued upswing in D.C. tourism, making it either a very smart or very silly time to add another attraction.

All that said, it looks potentially amazing.

More like this
Innovation
Sep. 21, 2022
Look: Drones could be the future of 3D-printed architecture
By Jennifer Walter
Innovation
Oct. 2, 2022
Want a better relationship with your dog? Neuroscientists say these 7 factors are key
By Tara Yarlagadda
Innovation
Sep. 29, 2022
Scientists have created a mechanical womb that can grow life in the lab
By Miriam Fauzia
Related Tags
Share: