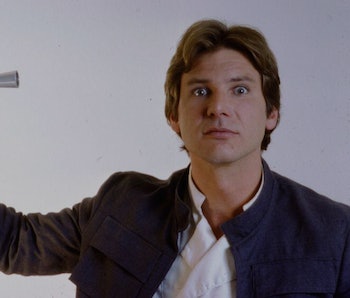 As the entire internet loses its collective mind, seemingly twice a day about the absence of a trailer for Solo: A Star Wars Story, there might be a really easy explanation: Lucasfilm/Disney could still totally change the release date.

On Monday, Birth Movies Death became just the latest in a long line of outlets who wrote an article pretty much demanding that a trailer from Solo — the standalone Star Wars prequel movie about young Han Solo — be released ASAP. And, this article and others bring up a good point: if the movie comes out in less than five months, surely you’d want to do some promotion for it by now. After all, some people say they saw some footage in Germany already.

But, what if it doesn’t come out in five months? What if everyone has got this all wrong? As of now, the release date for Solo is May 25, 2018. However, that’s not really a date that matters to anyone but industry insiders and hardcore fans who are constantly consuming articles about when the first trailer releases. As far as the general public is concerned, the real release date is announced when they see a trailer.

To be fair, the official Solo synopsis, released on January 16, still mentioned the movie is coming out on May 25. But not only could that still change, there’s a huge precedent for such a change. The original Star Wars film was originally supposed to come out in late 1976, not the summer of 1977. This is why there was a novelization of Star Wars (spoiler alert for 1976!) out in bookstores half a year before the movie was out in theaters.

These days, Lucasfilm wouldn’t do anything so clumsy as to spoil the entire plot of a movie, just because the release date was being pushed back by six months or more. But could they keep fans on the hook for a trailer that might not come until April, because the movie is really coming out in December, just like the last three new Star Wars movies? You bet they would.

Solo: A Star Wars Story is out everywhere on May 25. Supposedly.