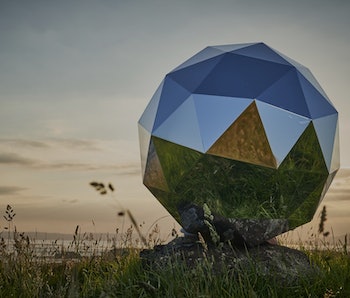 On Sunday, New Zealand-based aerospace company Rocket Lab launched a secret payload aboard its Electron rocket. The payload in question was a child-sized disco ball intended as an orbiting beacon of hope to humanity. Groovy — well, unless you’re an astrophysicist.

The Humanity Star measures a bit more than three feet across and comprises 65 reflective panels designed to do intentionally what the panels on other satellites do accidentally — reflect sunlight down to the surface and create the brightest artificial flares in the sky.

The most famous example of this is the Iridium flare phenomenon, named for the Iridium communications satellites. Their controlled motion makes it possible to predict when the flares will occur from light bouncing off one of the satellite’s three antennae. The Humanity Star ups that ante with its 65 carbon fiber panels and constantly spinning motion, all intended to maximize the number of flares.

It’s the same kind of glittering light show you get treated to in more intimate circumstances at the disco, or possibly the roller rink if you live in an especially Seventies-loving town. This isn’t an effort to bring the ethos of Saturday Night Fever into space, worthy a cause as that might be. Instead, Rocket Lab intends the regular flares to be a reminder to everyone who sees them of how interconnected we all are.

“No matter where you are in the world, rich or in poverty, in conflict or at peace, everyone will be able to see the bright, blinking Humanity Star orbiting Earth in the night sky,” Rocket Lab CEO Peter Beck explains on the Humanity Star’s website. “My hope is that everyone looking up at the Humanity Star will look past it to the expanse of the universe, feel a connection to our place in it and think a little differently about their lives, actions and what is important.”

While that all sounds noble and good, it’s worth noting astrophysicists kind of generally hate this thing. Reasons scientists have raised on Twitter including that its light pollution will interfere with observations, that this is a distraction from the wonder of the actual cosmos, and that this is another unnecessary bit of space junk in an already overcrowded upper atmosphere. On that last point, the fact the Humanity Star will burn up after nine months should make that less of a specific issue, it’s maybe worth wondering how much we should encourage aerospace companies to launch satellites as publicity stunts, however well intended.

If you still do want to see the Humanity Star, Rocket Lab designed the satellite’s 90-minute orbit so that it will pass over every spot on Earth, giving everyone a chance to look up and see a reminder of our place in the universe for the nine months it is expected to remain up there.

To see when the Humanity Star will pass overhead, visit the website and navigate to the “Track” section. There you can see its current orbital path, as well as enter your location. Since it’s powered by Google Maps, there’s no particular information required to get an accurate result.

Rocket Lab’s launch also represents the first such successful effort from New Zealand, as well as the first commercial launch from the southern hemisphere. The company has said it will consider future Humanity Stars once the current incarnation de-orbits and burns up in about nine months.