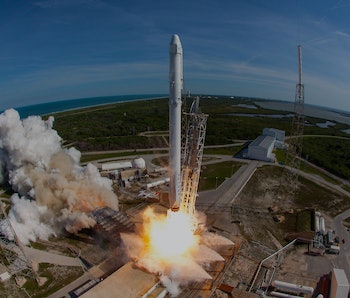 Thanks to the rapid expansion of the private space travel market, getting resources to space is easier than ever, especially if you’re willing to share a ride. Today, satellite communications company Iridium announced it was going to carpool (or rocket-pool, in this case) with NASA to get five of its NEXT satellites into space on top of a SpaceX Falcon 9 rocket in early 2018.

The five NEXT satellites will go alongside two NASA satellites. Iridium has been contracting flights on SpaceX’s rockets for a while (this will be its eighth), as has NASA. But it’s the first time the two entities have shared a rocket. NASA’s satellites are part of its GRACE-FO mission, which monitors the constantly shifting gravitational field around the Earth. The Iridium satellites are part of the NEXT program, which initially signed on with SpaceX to put a network of 70 communication satellites in a low-earth orbit. The additional launch will up that number to 75.

“This is a very smart way to get additional Iridium NEXT satellites into orbit,” said Matt Desch, chief executive officer at Iridium said in a press release. “This launch provides added resiliency to our network for not much more than we had planned originally to launch 72 satellites, including two with Kosmotras.”

Sharing space with NASA’s two GRACE-FO satellites makes sense both from an efficiency and a financial standpoint.

As Desch said, Iridium was going to contract with Kosmotras, a Russian rocket company, to get two more NEXT satellites into the sky, but found a way to launch them from U.S. soil at California’s Vandenberg Air Force Base.

As more and more companies enter the private aerospace market, getting things to and from orbit becomes a much more flexible market (see: Boeing scalping off some ISS tickets). In the long run, this is probably a good thing, because rockets tend to blow up every now and then.