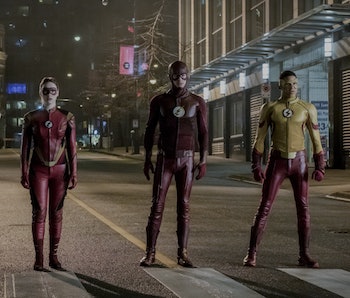 Speed, as it turns out, might just run in the family, because probably the last person you’d ever expect to don some speedster leathers will do just that before the end of The Flash Season 4, just like her brother did before her.

That’s right, Iris West will suit up as a Speedster before this season is through.

Entertainment Weekly reports that “Iris West will be suiting up this season!” The whole thing will be “temporary,” but she’ll definitely “suit up as a speedster in a March episode.” They add “additional details as to how are being kept under wraps at the moment.”

Rumors say she was filming Episode 16 of this season when the photos were taken. Assuming the show doesn’t take any weeks off, that episode should air on February 27. So that’s close enough, right?

If the whole thing sounds almost too good to be true, that’s probably because it is. Why would she suit up for only one episode unless there was something suspicious going on?

Just because someone suits-up as a Speedster, doesn’t mean they’re actually a Speedster. Remember that time Harry pretended to be the dead Eobard Thawne, aka Reverse-Flash, but from when he wore the face of Harrison Wells all so he could try and tame a telepathic gorilla?

Maybe Iris gets temporary super-speed and dons the costume while Barry and the rest of Team Flash is out of commission? Or maybe she fakes the whole thing as part of an elaborate ruse? There are tons of ways The Flash might give Iris a reason to pretend to be a Speedster.

But who knows, maybe she does get super-speed but only wears the costume once before learning that she’s pregnant and retiring from the superhero game altogether?

No matter what the explanation is, we’re willing to bet that “Mystery Girl” has something to do with it.