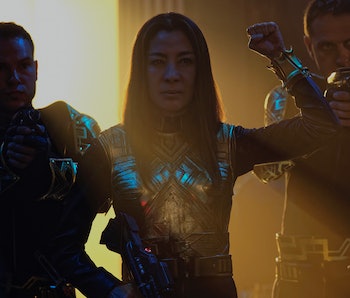 Is the 23rd century Emperor Philippa Georgiou Augustus Iaponius Centarius of the Terran Empire related to Empress Hoshi Sato from the 22nd century? One writer of Star Trek: Discovery says the answer is…sort of, but it’s complicated.

On Monday, Discovery writer Jordan Nardino took to Twitter to elucidate his own fan theory as to what the Mirror Georgiou’s title says about her possible connection to another deep-cut of Trek canon. If you’re following all that talk about the USS Defiant on Discovery and how it crossed over from the original series, and into the Mirror Universe, then it’s good to remember that the person who eventually took over the Terran Empire was the Mirror Hoshi Sato. But, Nardino says though Emperor Georgiou might not be related to Empress Sato by blood, there still might be a connection.

“Iaponius is Latin for Japanese,” Nardino said. “This (in my fever dream) is a title Hoshi Sato adopted when she named herself Empress, to honor her homeland.So is Georgiou descended from Hoshi!? Well…”

Nardino clarifies that there’s no way Georgiou is related to Hoshi by blood because they have totally different ethnic backgrounds.

Instead, he thinks that the “Iaponius” is something Georgiou took as a way to honor Hoshi’s legacy. “Georgiou took one of Hoshi’s titles as her own to connect them,” he says. Which means, yes, the writers of Discovery were thinking about the last Terran Emperor/Empress we saw on screen prior to introducing Georgiou as the new Emperor.

If you’re curious about additional reasons why characters have the names that they do, here’s why Georgiou is named Georgiou. According to the tie-in novel Desperate Hours by David Mack, the reason Georgiou’s last name is Greek is that she was married, and then divorced from a guy named Nikos Georgiou. She kept his name and a record player of his, however, implying their divorce was amicable. This is kind of like in the TNG episode “All Good Things…” when future-Captain Beverly Picard (née Crusher) kept Jean-Luc’s last name even though they had separated. However, neither Desperate Hours nor Nardino’s idea about Georgiou and Sato’s connection are technically canon, yet.

Still, the ongoing Trek novels are continuing to explore the backstory of some Prime Universe characters. Following Desperate Hours, Simon and Schuster will release a new book about Lorca and Georgiou called Drastic Measures. Set ten years before Discovery, this book will presumably focus on the “regular” Lorca, and not the Mirror version we’ve been seeing all season long. But, because Desperate Hours did such a good job connecting old Trek canon with new, it’s possible there might be some background hints about the Mirror Universe in this new book, too.

Drastic Measures will be published on February 6, 2018. The last three episodes of Star Trek: Discovery’s first season will air over the next three Sundays on CBS All-Access at 8:30 pm eastern. The season finale is set for February 11, 2018.