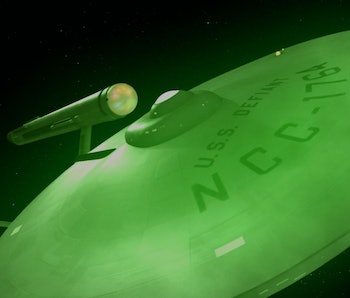 The latest episode of Star Trek: Discovery casually makes a deep dive into hardcore Trek lore with a bunch of original series references, but it also drops a super deep-cut plotline from a 2005 episode of the prequel series Star Trek: Enterprise. The USS Defiant referenced in this new Discovery episode is not the ship from Deep Space Nine, and for the uninitiated, it does have a slightly confusing history in the Trek canon. So much so, even the showrunners of Discovery knew bringing this old ship into the fold would be trickier than Captain Lorca’s Scotty impersonation.

Spoilers ahead for Star Trek: Discovery episode 10, “Despite Yourself.” And oddly, spoilers for Back to the Future II as well.

In “Despite Yourself,” the crew figures out that in order to get back to their own universe, they might need some other intel on another Starfleet ship that crossed over into this dimension: the USS Defiant, registry NCC-1764. As Burnham explains: “It’s unclear but data suggests that in the future, Defiant will encounter a phenomenon that will bring it into this alternative universe’s past.” And as Tilly says in the new episode, “What the heck! Hold your horses!” That’s right, the Defiant crossing over to the Mirror Universe is in the future for the characters of Discovery, but the point when it pops out in the Mirror Universe is like a century in the past. And the original series episode in which it first crossed over, wasn’t even about the Mirror Universe.

The Defiant first appeared in Trek canon in a 1968 third season episode of the original series called “The Tholian Web,” which, as you might guess, involves the Enterprise being trapped in a web created by some guys called the Tholians. To be clear, chronologically, everything in the original series (except for “The Cage”) hasn’t happened yet for the people on Discovery.

So, in “The Tholian Web,” Defiant was a sister ship of the old Enterprise, meaning it pretty much looked exactly the same when Kirk and Spock beamed over to it. Nothing about this episode was about the Mirror Universe, the only original series episode that was about the Mirror Universe was “Mirror, Mirror” in the second season. But, through the course of “The Tholian Web,” the Defiant got sucked into another dimension, though we never knew where it went.

Fast-forward (and backward) to 2005. The prequel series Enterprise is in its fourth and final season and does a two-part episode called “In a Mirror, Darkly,” which takes place entirely in the Mirror Universe. Like the rest of this series, “In a Mirror, Darkly” occurs in the 22nd century, about 100 years before the original series. And it’s here, where all the stuff in Burnham’s explanation from the new Discovery episode happened. It turns out that when the Defiant phased out of the regular dimension in “The Tholian Web,” it not only ended up in another dimension but it time-traveled into the past, too. Analogously, this is kind of like what happened to Marty and Doc in Back to the Future II when they leave 2015 and end up in an evil version of 1985. Only, unlike Back to the Future II, both the time travel and the dimension switching were a total accident. Basically, as temporal anomalies go, the one that got the Defiant in “The Tholian Web,” was a double-whammy.

“My brain still melts when I think about the Defiant. And that temporal anomaly,” co-showrunner Aaron Harberts tells Inverse. “We have always come at this from the standpoint of let’s tell the best story. What’s the best part about the Mirror Universe? And then go to the huge Trek fans that are on our staff who have watched all of Enterprise and say, ‘Okay. Now tell us about the Defiant.’ And then we kind of get nervous and then we kind of figure out a way to address it so that the fans who have done the deepest dive on the show know that we know that the Defiant existed. But the key is to really make sure that anybody could enjoy this trip over to the parallel universe.”

Most Trekkies will probably agree, that if you’ve seen this episode, having Burnham just quickly explain this in one sentence was probably the best way to go. Knowing all the details of where the Defiant comes from isn’t super important to the plot or the themes of the episode, but for completists, it’s certainly cool.

For those who still might be wondering about the other Star Trek ship called Defiant, here’s the quick explanation. It just has the same name. That’s it. But —and this might blow someone’s mind — there was another version of this other Defiant in the Mirror Universe, too. And, to make matters weirder, it had to be built by people from the Prime Universe. In “Shattered Mirror,” Terran rebels kidnapped Captain Sisko to make him help them complete their rip-off version of his Defiant.

Still, let’s not get worried about that right now. All of that is way in the future of stuff that is happening on Star Trek: Discovery right now, so there’s no need for Trekkies to call up Gretchen J. Berg and Aaron Harberts and tell them about the other Mirror Universe Defiant. Are we clear?

“I think after the wrap is when I had my panic attacks. When I realized, oh my gosh. Like, oh my gosh,” Berg said in reference to the Defiant time-travel and alternate universe shenanigans. “But we have to make sure that we tend to this in the way that it needs to be tended to but it sure takes a village.”

New episodes of Star Trek: Discovery air on Sundays at 8:30 p.m. Eastern on CBS All Access.