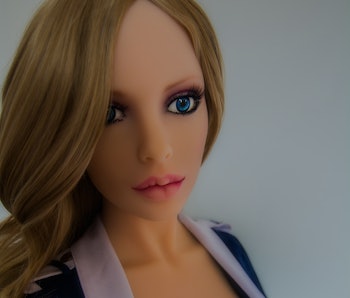 Sergi Santos wants you to know that with sex robots, it’s not just about the sex. The Spanish engineer and creator of the $5,000 Samantha doll, which went on sale late last year, has produced a series of videos clarifying what he sees as misconceptions about his creation.

Santos sees the main interest as less about having sex with the machine and more about how the concept can evolve, and whether the technology is available and affordable.

At the heart of Santos’s vision of this combination is Samantha. The A.I.-powered doll stands 5 feet 5 inches tall, with an array of 11 sensors designed to respond to the user’s touch. A thermoplastic elastomer outer layer is designed to feel like human skin. Internally, the machine’s “brain” has an SD card slot to support software updates, while the whole machine recharges its internal battery via USB.

Santos has seen a large amount of coverage for his creation. He’s outlined a future vision of how a similar machine could free humanity from work. He’s also said that a moral code could be developed for the machine within two to three months. It’s had a busy tour of Europe: an October appearance at an Austrian tech show ended early after a large amount of visitors groped the machine.

In another YouTube video uploaded Wednesday, Santos also expressed frustration with a “stupid question” from the media.

“I even think that I was more intelligent. I have been ‘idiotized’ by the stupid questions I have been asked,” Santos said. “How many times can you ask ‘have you had sex with a sex doll?’ There is a limit.”

Some experts are skeptical of some of Santos’s claims. The robot developer’s plan to outline a moral code for Samantha was met with criticism, with Alan Winfield, a professor of robot ethics at the University of the West of England, describing it as “nonsense.”

More like this
Innovation
Jan. 23, 2023
This biohybrid robot walks using lab-grown mouse muscles
By Joanna Thompson
Innovation
Jan. 25, 2023
Watch: This jail-breaking wireless robot melts and reassembles on command
By Jennifer Walter
Innovation
Jan. 19, 2023
A robot choreographer reveals why M3GAN — and all robots — should dance
By Molly Glick
LEARN SOMETHING NEW EVERY DAY.
Share: