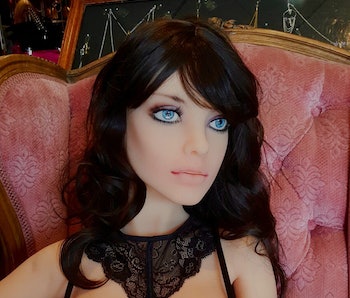 A sex robot on display at an electronics fair was taken away by its owners after an overwhelming amount of visitors groped the machine and broke two of its fingers in the process.

Samantha, developed by Synthea Amatus, was on display at the Ars Electronica Festival in the city of Linz, Austria. The artificial intelligence-powered bot initially answered questions from attendees at last month’s tech show, but, eventually, the creators had to step in when attendees started assaulting the robot.

“The people mounted Samantha’s breasts, her legs and arms,” Sergi Santos, head of the Barcelona-based firm behind the robots, told the Daily Star. “Two fingers were broken. She was heavily soiled.”

Samantha, who went on sale in the United Kingdom last month, has a price tag of £3,500 ($4,736). She stands 5 feet 5 inches tall, with an array of 11 sensors designed to respond to the user’s touch. A thermoplastic elastomer outer layer is designed to feel like human skin. Internally, the machine’s “brain” has an SD card slot to support software updates, while the whole machine recharges its internal battery via USB.

These features were overlooked by attendees, though, who seemed more interested in breaking the machine.

“People can be bad,” Santos said. “Because they did not understand the technology and did not have to pay for it, they treated the doll like barbarians.”

Samantha has a range of features that set her apart from competitors. She can tell jokes, has a number of varying modes, including where she can discuss subjects like philosophy. Although she can understand English, German, and Spanish, she only replies in English for now, with the company planning to expand out its language set in the coming weeks.

Synthea Amatus has so far sold fewer than 100 dolls, but Santos recently struck a deal with a Chinese sex doll manufacturer to produce 50 per week. Eventually, the team plans to bring the doll to the United States while using the SD card slot to gradually increase the capabilities of the machine’s “brain.”