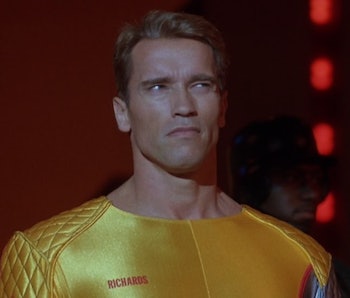 Arnold Schwarzenegger isn’t in the movies quite as often as he used to be, and since he moved out of the governor’s mansion, he hasn’t been in the news quite as much either. But even though The Governator is not all that relevant these days, he’s found his way into the scientific literature, thanks to a discovery by researchers at the Natural History Museum of Los Angeles County, who named the world’s smallest fly after one of the world’s swollest men.

It’s a strange honor, but the way entomologist Brian Brown, Ph.D., tells the story, the scientific dedication was a natural fit. You see, the fly, called Megapropodiphora arnoldi, is only 0.395 millimeters long, but it has massive forelegs — not that different from Schwarzenegger’s thick, vascular arms.

“As soon as I saw those bulging legs, I knew I had to name this one after Arnold,” says Brown in a statement. “Not only is he a major cultural icon and an important person in the political realm, his autobiography gave me some hope that I could improve my body as a skinny teenager.”

And while Brown may have bulked up a little since his days as a twiggy teen, this fly is anything but massive. At less than half a millimeter long, it’s barely visible to the naked eye. Brown and his colleagues published the paper describing the specimen in the Biodiversity Data Journal on Tuesday.

M. arnoldi unseats the previous record-holder for world’s smallest fly, Euryplatea nanaknihali, which, as chance would have it, Brown also discovered back in 2012.

Brown and his colleagues suspect that M. arnoldi, like E. nanaknihali, is a parasitoid that spends at least part of its life infesting ant or termite colonies. Their reason? The single female specimen that’s standing in for the entire species has a sharp ovipositor, tiny wings, and stumpy mid- and hind-legs.

Because of these physical features, Brown and company think M. arnoldi probably clings to ants or termites it comes across, hitching a ride until it can parasitize the colony. So while the bulging forearm comparison may be flattering to Schwarzenegger, the parasitoid thing may not be.

Inverse has reached out to Schwarzenegger via Twitter and will update when he responds.