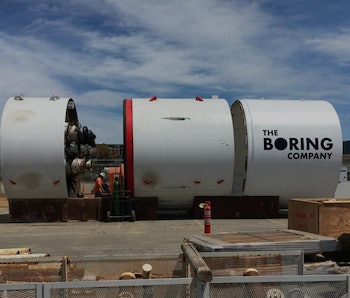 On Monday at 7 p.m. Pacific, the company will propose plans to build a network of tunnels under LA in a city council meeting hosted in Culver City, an independent city in Los Angeles County. If Musk’s company is able to secure the city council’s approval, it would be able to begin its historical underground operations.

A representative or representatives of The Boring Company will be discussing the proposed map of the LA tunnel network in a public hearing where residents will be able to ask questions or voice concerns. This will be held at the Mike Balkman Council Chambers in the City Hall of Culver City.

The city council appears to post videos of its meetings after the fact, though there’s no indication a live stream will be available for those curious about hearing the Boring Company’s pitch live. The city’s government has not yet responded to Inverse’s requests for comment.

Culver City’s website has provided an online forum where residents can voice their opinions remotely. While only a handful of comments have been posted, the general sentiment is positive, but hungry for more information.

“There is not enough information to make an informed comment,” writes Laura Stuart. “We need to know the scope of the proposed job, how it will disrupt our lives, our homes (especially property damage to homes that will crack and sink due to boring), what value it has to Culver City, where are the proposed on/off ramps, how much will it cost Culver City in future maintenance and or damage repairs. Elon Musk is a visionary. Just would like to know the reality first.”

This skepticism is not unwarranted, as the Boring Company has been vague about how construction of these tunnels would affect the lives of residents. A report by The Argonaut, notes that a few city officials have been given a tour of a test tunnel thus far. One of them was Culver City Councilman Jim B. Clarke who seemed enthusiastic at the prospects of this project, but didn’t provide a lot of information regarding what he saw.

Until the city council meeting, we only have the map provided by the Boring Company that depicts a 6.5-mile tunnel through Los Angeles and Culver City that the firm would construct as a proof-of-concept. The rest of the map is a “potential phase 2,” or how the original tunnel could be expanded.

As ever, Elon Musk’s newest project is turning out to be the exact opposite of boring.