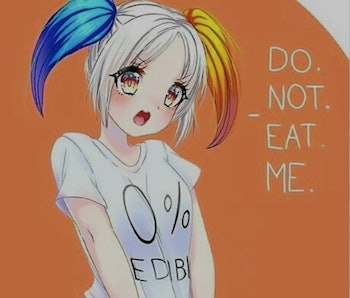 Since the latest internet sensation, the “Tide Pod Challenge”, kicked off in late December, it’s spawned its own world of Youtube videos showing teens eating Tide Pods. Next, calls for teens not to eat tide pods cropped up. And finally, of course, there were all of the memes created to document the whole process.

That’s where Tide Pod-Chan comes in.

Inspired by Earth-chan, an anime-style anthropomorphic representation of Planet Earth, the latest -chan character is typically portrayed as a cute anime girl with blue, white, and orange hair; an orange sweater; and a school-girl get-up.

In one YouTube video, published on January 12, a sexy-ish female representation of a Tide Pod, complete with tri-colored hair, an orange sailor outfit with a blue bow half-sings and half-raps a message NOT to eat Tide Pods:

I should be here to tell you “THAT’S WRONG!”

Not that I blame you all anyways.

I’m such a snack wouldn’t you say?

I know I look small and delicious,

Well it only takes 45 seconds

And you’ll be in another dimension”

And then, the sing-song rapping stops, the screen flashes black, followed by these ominous words:

Of course, in a super meta twist, the first words of Tide Pod-Chan, “Gucci Gang”, refers to the song by rapper Lil Pump, which has been viewed nearly 450 million times on Youtube and inspired its own set of memes.

According to the American Association of Poison Control Centers, there have been at least 39 reported cases of intentional “exposures” (most were ingestion) to Tide Pods from 13- to 19-year-olds in the first 15 days of 2018, and over 12,000 calls have been made to poison control centers.

So, if Tide Pod-Chan is able to do play any kind of role in stopping teens from engaging in this dangerous trend, we’re all about it.

More like this
Culture
5.12.2022 11:30 AM
You need to watch this genre-warping time-loop anime on HBO Max
By Mónica Marie Zorrilla
Culture
5.7.2022 8:00 PM
Studio Ghibli films have a subversive message hiding in plain sight
By Yuan Pan and The Conversation
Culture
5.17.2022 8:30 AM
The 10 best Black Mirror episodes ever, ranked
By Robin Bea
Share: