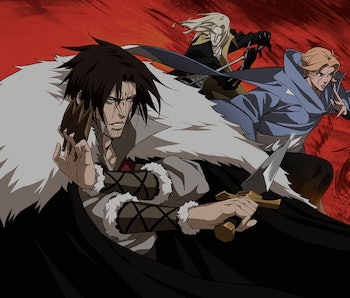 The man who killed Dracula is back! After some pestering, comic book legend, and current Castlevania writer Warren Ellis has confirmed that the popular animated adaptation of the seminal classic Nintendo game will return to Netflix later this year.

On Friday, Ellis took to Twitter to clear up any misconceptions about the seconds season of Castlevania. Although Netflix did announce a second season of Castlevania on the same day the first season was released, there hasn’t been a clear idea of when that second season might materialize. Ellis has now made it clear: eight episodes are coming sometime in the Spring. The number of episodes is double the length of the first season, which will be welcome news to fans who felt as though the previous finale was somewhat incomplete.

Following the story elements of the 1989 Nintendo game Castlevania III: Dracula’s Curse, the story of the Castlevania series centers on the last of the Belmont clan, Trevor Belmont. He’s part of a family of monster hunters, which is sort of analogous to Van Helsing of the original Bram Stoker novel.

However, Stoker purists probably won’t find much else in common with the famous horror novel. But, for vampire fans in general, the graphic imagery probably will remind old-school horror fans a bit of the famous Hammer Films starring Christopher Lee and Peter Cushing, if not in tone, at least in terms of blood.

Ellis himself is a longtime comic book writer with credits including X-Men, and Iron Man, though he might be most famous for his groundbreaking science fiction series, Transmetropolitan which posits a future in which humans willingly undergo surgery to become aliens. In other words, Ellis is perfect for Castlevania in every way.

Now that the writer has revealed that the show will have an eight-episode run, it’s only a matter of time before Netflix announces the official release date.