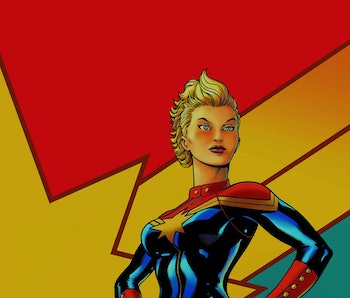 Captain Marvel is one of the strongest heroes in the entire Marvel Universe, in terms of raw power. So it’d be a shame if Carol Danvers (Brie Larson) didn’t offer to lend a hand to the Avengers when the Mad Titan, Thanos, arrives with his Infinity Gauntlet in Avengers: Infinity War. Rumors insist there is a cameo from Captain Marvel, or a post-credits scene with Brie Larson as Carol Danvers, in the next Avengers film, but it seems really unlikely. Here’s why.

At Comic-Con last July, director Joe Russo flat out said Captain Marvel is not in Infinity War. Furthermore, Scarlett Johansson told Vanity Fair that Larson is in Avengers 4, and even shares a scene opposite Mark Ruffalo as the Hulk. “She’s here before shooting the stand-alone Captain Marvel movie so we get to watch her get her feet wet for real,” Johansson said.

Captain Marvel, which hits theaters before Avengers 4 in March 2019, is only close to starting production in Atlanta, Marvel’s favored city with a large number of movies shot and produced out of Pinewood Atlanta Studios. Principal photography on Avengers 4 wrapped in early January 2018, which the cast and crew celebrated with an epic cake of Thanos.

Exactly when Captain Marvel shoots is unclear. However, actress Brie Larson has recently begun training with U.S. Air Force personnel to fulfill her role of ace pilot Carol Danvers. In an Instagram from Wednesday, Air Force serviceman Don Wallace shared photos of himself with Larson. Based on his captions, Wallace gave Larson a tour of a McDonnell Douglas F-15 Eagle, the standard fighter plane used by the United States Air Force. So Carol Danvers may not arrive in time for Avengers: Infinity War, as she’s still training before she can soar.

Avengers: Infinity War will be released on May 4. Captain Marvel hits theaters on March 6, 2019.