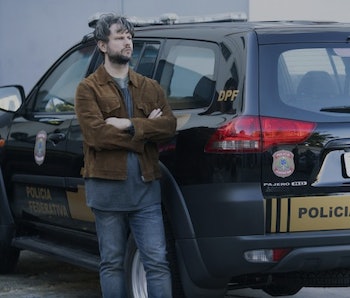 Netflix sure loves it’s “based on real events” crime dramas, and its latest, The Mechanism, promises to expose the biggest corruption scandal ever, but what’s the real “true story” here?

Much like the creators’ previous project, Narcos, The Mechanism offers a dramatized retelling of supposedly true events, but instead of the rise and fall of Pablo Escobar, we get an investigation into a corruption scandal in private and state oil and construction companies in Brazil. Most call it “Operation Car Wash.”

Actor Selton Mello stars as a retired federal police deputy and Caroline Abras plays his mentee, an ambitious federal agent. The many character names are allegedly fictional, so don’t expect the story told to match up to reality.

The official trailer released Thursday, and the plot feels a lot a more contemporary version of The Wire set in Brazil mixed with Narcos, which is sure to pique the interest of plenty viewers:

The real-life case began as an investigation into simpler money laundering but blossomed as it exposed of corruption at the state-controlled oil company Petrobras. The investigation began in March 2014 as it targeted doleiros — black market money dealers — that used small businesses (like car washes) to launder money made from criminal enterprises.

“Lavo jato” literally means “car wash,” which is where the popularized name for the scandal comes from. As the investigation blossomed, it became apparent that oil company executives were taking bribes in exchange for awarding contracts to construction firms at inflated prices — for things like refineries, tankers, and drilling platforms.

Selton Mello’s character targets a kingpin of sorts whose name is something like Puberto Abraham. “He started smuggling goods,” the character explains in the trailer, “but made a name for himself with money laundering.” He’s almost certainly based on Alberto Youssef, one of the principal players in the whole scandal.

When The Mechanism calls lavo jato the “biggest corruption scandal” ever, they mean it.

Estimates say the real-life scandal has laundered something to the tune of $9.5 billion USD to date amongst the many operations. The network for doing so was damn near impenetrable, especially considering it involved an intricate network of high-profile politicians and corporate businessmen.

Specific plot details remain somewhat scarce for the show, but chances are it will follow the ongoing investigation as closely as it can without getting too close to the truth.

The Mechanism will be released by Netflix on March 23, 2018.

More like this
Culture
6.29.2022 11:30 AM
You need to watch the most subversive sci-fi love story on Netflix before it leaves this week
By Alex Welch
Entertainment
6.21.2022 3:46 PM
Stranger Things 4 Vol. 2 trailer just solved a huge Eleven mystery
By Alex Welch
Entertainment
6.30.2022 3:25 PM
Netflix may have deliberately spoiled a huge Stranger Things death
By Dais Johnston
Related Tags
Share: