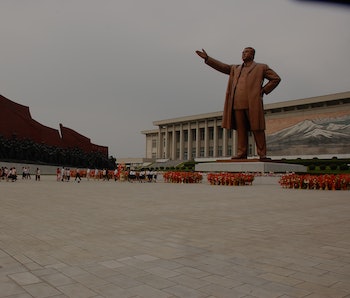 Dying to travel? If you’re planning on going to a country with a Level-4 warning, the U.S State Department suggests you draft your will and plan your funeral ahead of time. It’s all part of their new system of travel advisories that rolled out on January 10, which ranks places on a scale of one to four with a corresponding color code.

The Level-4 red warning is the highest and most aggressive advisory level, and 11 countries have this designation. On each of their corresponding information pages the government advises travelers to do the following:

Draft a will and designate appropriate insurance beneficiaries and/or power of attorney.

The somber message is more one of common sense — if you want to go somewhere dangerous, be prepared for any and all worst-case scenarios, including death. North Korea is the only Level-4 country with a travel “ban,” meaning a U.S. passport cannot be used to travel to the country “due to the serious risk of arrest and long-term detention of U.S. nationals.” Though the U.S. State Department cannot actually ban travel to any country, those wishing to visit North Korea must apply for a special validation as of September 2017. Most tour groups, including Young Pioneer Tours, the group that facilitated Otto Warmbier’s trip, no longer offer services to U.S. travelers. The U.S. has no embassy in North Korea and cannot provide emergency services to U.S. citizens within the country. Though the Swedish embassy acts as a protecting power, the State Department warns “The North Korean government routinely delays or denies Swedish officials access to detained U.S. citizens.”

The new ratings take the place of the previous travel advisory method which, via the State Department website, issued travel “alerts” for short-term dangers like disease outbreaks and travel “warnings” for long-term dangers like military conflicts. Travelers often had a hard time knowing the difference in severity between alerts and warnings, something the new system hopes to alleviate.

During a special briefing, Bureau of Consular Affairs Acting Deputy Assistant Secretary For Overseas Citizens Services Michelle Bernier-Toth explained, “[I]n the new Travel Advisories, we’ve done away with Travel Warnings and Travel Alerts. We’ve done away with emergency and security messages – because, again, that was something that people didn’t always understand the difference – and we have gone to a Travel Advisory for every country, including Antarctica.” The 11 countries have received Level-4 status: Afghanistan, Central African Republic, North Korea, Iran, Iraq, Libya, Mali, Somalia, South Sudan, Syria, and Yemen. There are also states within Mexico that have a Level-4, although the country as a whole is at Level-2.

Any country receiving a Level-2 or above will also have more specific letter code along with it: C for crime, T for terrorism, U for civil unrest, H for health issues, N for natural disasters, E for time-limited events (elections, sporting events), and O for other.

As of November 2016, State Department travel site has become mobile-friendly, and now includes an interactive map showing threat levels by color and locations of consulates and embassies.

According to Deputy Assistant Secretary Bernier-Toth, countries will be routinely reviewed. “Levels 1 and 2 will be reviewed every year, if not more frequently, depending on circumstances. Levels 3 and 4 we review every six months.” For now, if you’re looking to travel without making legal arrangements for your possible demise, try picking a place on the map that’s out of the red, orange, and yellow.

More like this
Gear
Jan. 27, 2023
How to lock down your iCloud with Apple's Advanced Data Protection
By Alyson Velati
Innovation
Jan. 19, 2023
A robot choreographer reveals why M3GAN — and all robots — should dance
By Molly Glick
Culture
22 hours ago
Lost Jumped the Shark by Breaking Its Most Important Rule
By Jake Kleinman
LEARN SOMETHING NEW EVERY DAY.
Related Tags
Share: