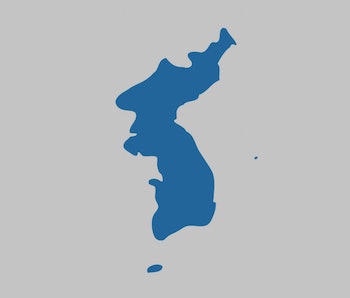 In a unprecedented show of inter-Korean relations, North and South Korea will not only enter the Winter Olympics under a unified flag, they will actually compete together.

On Wednesday, the two Koreas agreed to field a women’s hockey team that will include both North and South Korean teammates. It will be the first time the two Koreas have competed together in an Olympics. The last time the two nations competed together was in 1991 at both the World Youth Football Championship and the World Table Tennis Championships.

The Korean unification flag, however, has been used a number of times at international games, even when the teams haven’t been competing together.

The flag features a simple, blue illustration of the entire Korean peninsula, set on a white background. Crucially it doesn’t now have a border that shows the divide between the two countries. It’s purely symbolic and has no official status in either country.

“We are very happy and proud to be together, because we are one race.” That was the quote given to the New York Times story in 2003. Kim Ja Youn, a biathlete from South Korea, who along with the North Korean official Kang Hyon Su carried the unification flag.

Organizations like Unification Korea sell merchandise emblazoned with the flag and donate their proceeds to pro-unification non-profits.

It was first used in 1991 for the table tennis event, and since has been flown by Korean athletes walking together at the 2000 Summer Olympics in Sydney, Australia; 2004 Summer Olympics in Athens, Greece; the 2006 Winter Olympics in Turin, Italy; as well as several Asian Games in the 2000s.

But tensions between the two nations have been strained in recent years; while more aggressive weapons development and deployment by Kim Jong-il and Kim Jong-un occurred in North Korea, the flag was not used nor did the teams walk together at the Beijing, Vancouver, London, or Rio De Janeiro Olympics. North Korea didn’t compete in the 2014 Sochi Olympics.

Now, however, the fact that the flag is back in the mix for the Seoul games signals that the two Koreas are opening up a dialogue again. It’s a positive sign of cooperation, amidst a tense climate between North Korea and the U.S. over the country’s continual weapons testing.

Since Korea was separated into two nations by the U.S. and Russia at the end of World War II, there have been varying degrees of interest in reunification, depending on the political climate of the day. The idea, however, has always being seen by many Koreans on both sides as something of a long term goal. South Korea has an entire governmental body devoted to the concept, called the Ministry of Unification.

North and South Korea have also agreed to root together for both countries in the upcoming Olympics, and North Korea intends to send 230 people to the Olympics as part of a cheer squad that will support the athletes.

More like this
Culture
6.26.2022 12:30 PM
40 years, The Thing set a new standard for sci-fi thrillers — and accidentally inspired a modern movement
By Andy Crump
Culture
6.21.2022 7:55 PM
You need to watch the most nostalgic time-travel movie on Netflix before it leaves next week
By Jake Kleinman
Culture
6.17.2022 6:00 PM
50 years ago, Watergate changed the American political thriller forever
By Steph Green
Related Tags
Share: