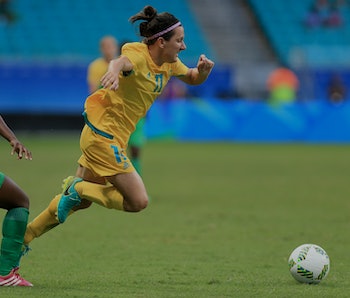 Olympians are feeling the heat, and not just from their competitors.

A report published by Brazil’s Climate Observatory on Monday says that temperature increases caused by climate change will make breaking records in Rio much more difficult. It also stresses that the higher temperatures will increase the health risks for Olympic competitors.

The report included this gem from Luzimar Teixeira, a professor of physical education and sport in Sao Paolo:

In the 2014 World Cup — also hosted in Brazil — the heat and humidity in Brazil had a noticeable (if unscientifically observed) effect on the teams. Two matches had to be interrupted for cooling breaks so the athletes could deal with temperatures over 90 degrees. There was also the infamous “Manaus curse,” where teams consistently lost after playing in the stadium in the Amazon in Northern Brazil. For the Olympics, the start times of soccer games in Manaus have been pushed back to start at 6 p.m., to decrease the heat stress on the athletes. And let’s remember that while these are summer events, it’s actually winter in the southern hemisphere — meaning temperatures are actually hovering on the lower side right now.

So it’s unlikely that there will be speed records from Rio because of the heat and humidity. Once it gets over 52 degrees in a marathon, times drop by two minutes for every ten degrees the temperature rises. For shorter track and field events, the impact may not be as dramatic, but high temperatures have a huge effect within the body of an athlete.

When temperatures hit the 90s, muscle movements are impaired, sweat production can increase by fifty percent, and sweat is no longer actually cooling the body, which means athletes’ bodies break down under extreme heat conditions and are at risk for hyperthermia. If an athlete continues to push through the heat, they can start to increase their core body temperature; once over 104 degrees, they run the risk of dying from heat stroke.

Fifteen of the sixteen hottest years in Brazil have happened since 2000. And as the temperatures continue to rise, the Climate Observatory suggests that the difficulties of competing in the heat will get even worse. If the high-emissions scenario for the end of the century is correct, all major cities in Brazil will experience enough heat stress to prevent outdoor sports for months every year because of the danger of dying from exercise. This would be particularly bad in the Northern parts of Brazil – so Manaus may not see another soccer match after this century.