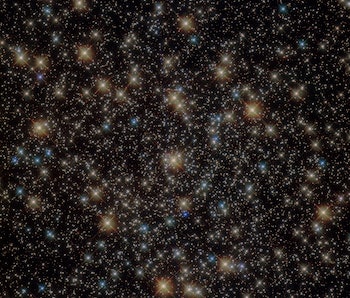 A star that is roughly 16,300 light-years away from the sun was inexplicably being flung around at speeds of several hundred kilometers per hour — or so we thought.

The group of international astronomers that observed the star inside of a cluster called NGC 3201 in the Vela constellation knew that the only possible intergalactic object that could be causing it to do this is a black hole that was hiding among thousands of other stars.

In a research paper published in the Monthly Notices of the Royal Astronomical Society on January 9, the team detailed how they were able to detect this “lonely black hole” inside of NGC 3201. This is the first black hole that has been discovered without the help of X-rays or radio waves and it’s the first one to ever be discovered in these this type of cluster.

Globular star clusters are spherical collections of tens of thousands of stars that can be found in most galaxies and are one of the oldest known stellar systems. Due to the age of these clusters and the sheer number of stars found inside them they are thought to have produced a sizable number of stellar-mass black holes — or black holes formed by the gravitational collapse of a massive star.

By utilizing the MUSE instrument on the European Southern Observatory’s Very Large Telescope in Chile, the team was able to track the erratic movements of this one star to prove it was being moved by a black hole 4.36 times the Sun’s mass, which is actually pretty small by black hole standards.

The fact that this star was not being swallowed up let the astronomers know that this newfound black hole is also inactive, which means it’s not currently devouring matter that comes too close.

“Until recently, it was assumed that almost all black holes would disappear from globular clusters after a short time and that systems like this should not even exist,” Benjamin Giesers, the lead author of the paper, in a statement. “But clearly this is not the case…This finding helps in understanding the formation of globular clusters and the evolution of black holes and binary systems — vital in the context of understanding gravitational wave sources.”

Previous studies have suggested that black holes may be more common inside of globular clusters than previously thought. This discovery certainly bolsters that argument and gives astronomers an idea for what to look for when they’re looking for inactive black holes in the future.

More like this
Science
5.19.2022 3:45 PM
New picture answers many questions about our galaxy's black hole — and reveals some mysteries
By Sarah Wells
Science
5.11.2022 8:15 PM
An ultra-bright nova hid an elusive new phenomena — but astronomers caught it in action
By Kiona Smith
Science
5.14.2022 7:00 PM
Why scientists think physics could be in for a reckoning
By Roger Jones and The Conversation
Related Tags
Share: