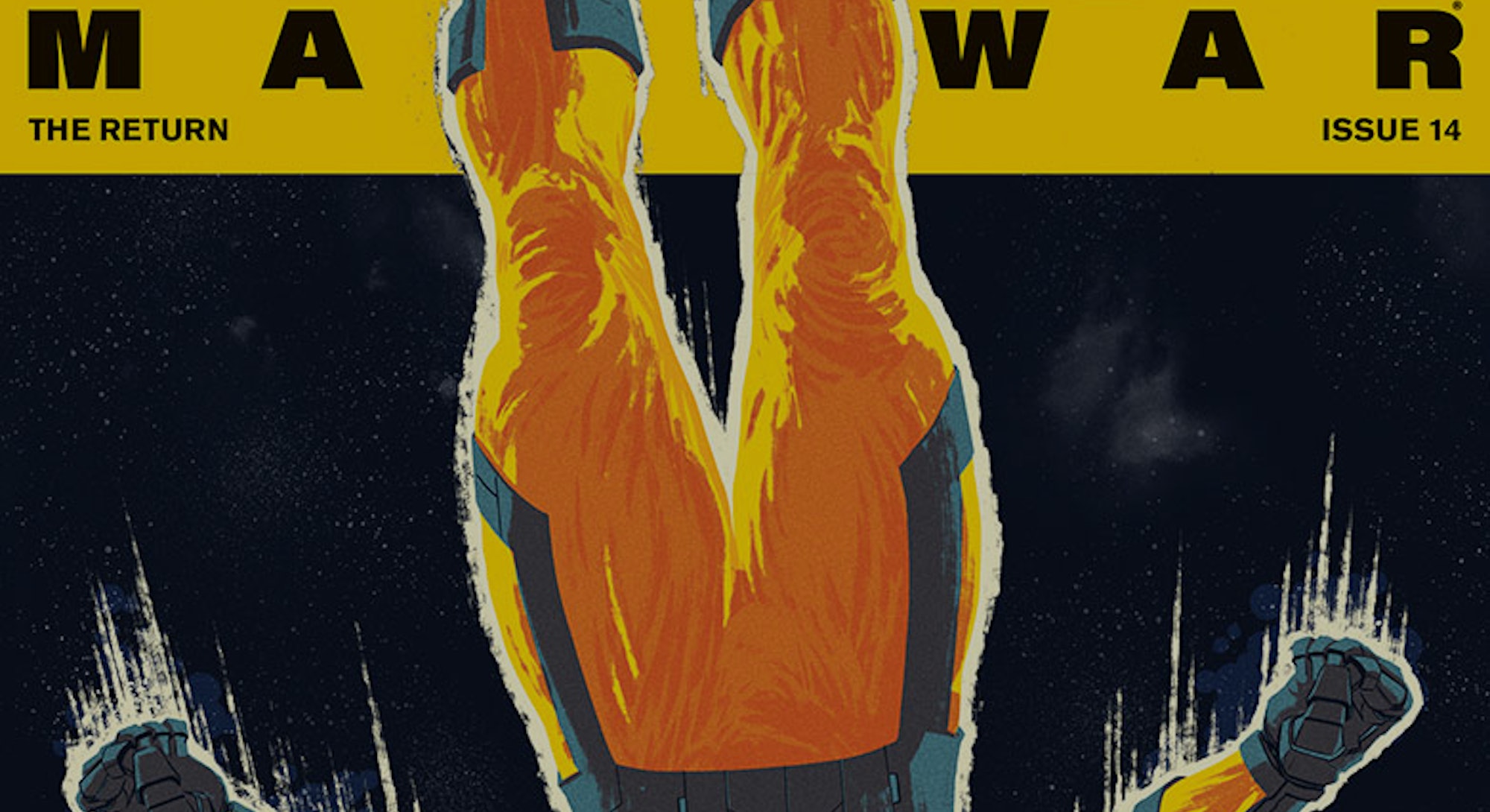 Of all the superheroes who populate the Valiant Universe, X-O Manowar has gone the farthest in all of known time and space. Born under the boot of the ancient Roman empire, Aric of Dacia was abducted by aliens and held a slave until he fought back, stealing the most advanced suit of armor in the galaxy, the X-O Manowar armor, in the process. Thrown into the 21st century, Aric lived among humans on Earth, and even became a member of Unity, Valiant’s flagship team of heroes alongside Livewire, Ninjak, and the Eternal Warrior.

But last year, in Valiant’s relaunch of X-O Manowar by Matt Kindt, Aric left Earth for the planet, Gorin, where he buried the armor and tried (and failed) to find peace as a farmer. Aric’s reason for leaving Earth remained a mystery — until now.

In issue #14 of X-O Manowar, hitting shelves on April 25, Valiant fans will finally learn why the most perfect soldier put the one thing he was good at, war, behind him. As Kindt teases to Inverse, the revelation will rewrite everything fans have seen in the last year of X-O Manowar. “It was an idea I’ve had from the beginning,” Kindt tells Inverse in a phone interview. “It’s a super personal reason and I can’t imagine anyone would guess it.”

In a conversation with Inverse, Kindt opens up about the last year he spent building Aric back brick-for-brick on his relaunch of X-O Manowar. He also teases what’s to come, with Aric’s return to Earth and how it will ripple across the Valiant Universe in the upcoming blockbuster event, Harbinger Wars 2, coming May 2.

What can you say about Aric’s return to Earth in X-O Manowar #14? Will we know why he left Earth in the first place?

It will cast the first year [of the book] into a new light. It’s not a twist, like, “I tricked you.” It’s more that it reveals something that happened to him that will give new meaning to everything he did in those first 13 issues. Not just why he’d run off to another planet, but, also, why he buried the armor in the first issue. What led to that? Those questions, which I think as you read the series you get distracted by all the politics and action, you forget he was mad at that armor. Him and his relationship to his armor is one of the things that caused his break from Earth.

When Aric returns to Earth he’ll be in Harbinger Wars 2. What role will he play in that event, especially as a more cosmic character than the grounded-to-Earth characters of Harbinger?

He’s definitely a big piece, and I think both sides would like to have him on their side. The good thing about Aric is that he doesn’t like to be bossed around or told what to do. He’s going to have to come down on one side or the other. A lot of his old friends are going to be approaching him and trying to convince him to be one thing or another. Honestly, he picked the worst time to come back to Earth.

Of all the reunions Aric will have on Earth, which should fans look forward to the most?

I think his interaction with Livewire has always been really interesting. I think that’s going to be sort of what relates to the meeting we’re going to get to see.

Issue #14 is your end to a year-long chapter in X-O Manowar. Have your ideas about Aric changed after writing him on his own, without his Unity teammates?

It’s interesting because the only other times I’ve been able to write him is when it’s a team book. With this, it was great because I had so much room and time to figure out what makes him tick, and show what’s great about him. I kinda hate when people are like, “He’s like Valiant’s Iron Man.” That’s one percent of what he is. The beauty of the character to me is that he is from Roman times, this barbarian that’s got alien technology.

His history and where he comes from, that’s interesting to me. He’s a completely different kind of person than anybody living today. That’s the fun of writing the character: Doing that research and delving into Visigoth culture and trying to figure out what he would do in these situations we put him in.

You spent the last year building up to Aric putting the armor on again. For what reason did you want to literally strip him of his most recognized weapon?

It was a way to strip all the distractions and get to what makes him Aric. His name’s Aric, so we’ll call him Aric, not Manowar. It was great to not have the distraction of the armor, which is the coolest thing in the book. Everybody’s waiting for it. I was like, “I hope people will stick with it,” because when I pick up X-O Manowar, I want to see him flying and hacking things with his energy sword. As a reader, that’s what I want, but as a writer, I want to make him three-dimensional. When the armor’s there, it’s harder to see him, figuratively and literally.

When you’re a kid and you watch Superman, or Godzilla, and the first 20 minutes, you’re like, “Come on. Put on your costume.” That kernel, I think, is in everybody. But in this, I was trying to make it something where you’re engaged with the character and what’s happening with the drama first. The armor’s lurking there in the background as a tease, but you’re not impatient for it. As a writer, that was one of the challenges, trying to make you not antsy for his costume.

I think as a result, the title of the book became literal. Even without the suit, he really is a man of war. Was that on purpose on your part?

I structured the first year around his progression. I wanted to strip him to his basics. He’s farming and sick of fighting. And then, through the series, you realize, maybe before he does, that the thing [he’s] good at is fighting, so why aren’t you doing that? He’s resisting it, and he gets sucked back into it. That was fun to build him back up and make him that “man of war.” Make him earn it, than just starting out with him being this cool badass.

My western origin of him landing on the planet, he’s like the Man with No Name walking into town and not wanting to fight but having all these secret skills. That was the inspiration to kick the series off. I love Clint Eastwood in Unforgiven. I love that idea of hidden powers a character has and letting him reveal that. That’s fun to read.