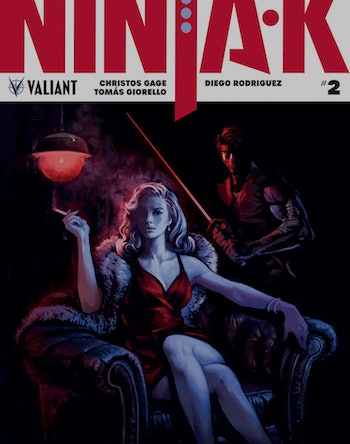 Imagine if the biggest events in world history had, somewhere lurking in the shadows, a ninja pulling the strings. That ridiculously fun scenario is the basis of a new comic book that launches next month that looks to be a gutsy, bold alternative to the Marvel and DC Comics.

From the front lines of World War I to the unseen battles of the Cold War, Valiant’s newest comic book series Ninja-K will reveal the shadowy heroes and killers who shaped the modern world and the rest of the Valiant comics universe.

Due out on November 15, Ninja-K stars Valiant’s resident British ninja, Colin King (aka Ninjak) in a new adventure that pits him against his own heritage: MI-6’s top-secret black ops division known as the “Ninja Programme.”

Written by Christos Gage (previously of Marvel’s Daredevil on Netflix) and illustrated by Tomas Giorello, Ninja-K seems set to blow the lid off the Ninja Programme as it reveals Ninjak’s predecessors for the first time, beginning with Ninja-A who served the King George V during the “Great War,” or World War I.

In an email interview with Inverse, Gage says that not every ninja will get the full spotlight in the series. “We didn’t want to overwhelm readers, so some ninjas will just be mentioned in passing,” says Gage. But the ones who are seen in action will change Ninjak’s world forever.

See the rest of the interview below, along with exclusive pencil art from Giorello from Ninjak #1.

For so long, Valiant readers have known Colin King as a one-and-only character. Ninja-K is changing all that. How much will readers rethink Colin after your series?

Hopefully, they’ll still think he’s just as awesome, but there is an entire world of other ninjas that came before him. The real question is, how will Colin rethink himself after what he’s about to face?

What can you tease us about the other Ninjas before Colin? How much will we get to know Ninja-E, Ninja-F, etc.? How different are they from Colin?

Issue #4 spotlights Ninja-G, the first female agent, whose concept is sort of “what if Foxy Brown was a ninja?” And we’ll be doing a WWI-set Ninja-A backup story. Each agent is different in his or her own way, but there are some things they all have in common, like the danger and isolation.

With Ninja-A in World War I and Ninja-E in the Cold War, it sounds like Ninjas have a short career. Is Colin just that good if he’s managed to survive for a long time?

Colin is one of the best, if not the best ever. And some did have short careers, but death isn’t the only reason an agent’s tenure ended. For example, Ninja-A was Japanese; an elite ninja on loan from Japan to their ally in World War I, Great Britain. He was still around in World War II, but England and Japan were no longer allies, they were enemies. So Ninja-A ended up training Ninja-B, then fighting him.

Ninjak is one of Valiant’s most coveted characters. How did Valiant react when you wanted to fully map out Ninjak’s backstory?

They really responded to the initial “road map” I sent sketching it out. They could see the possibilities inherent in having a rich history to draw on.

How much of The Ninja Programme have you worked out before the first issue? How much of that will show up in the plot?

One of the first things I did was map out the history and the previous agents, in rough terms. I tried to make each agent unique and a product of their time. While I’ve left myself some room to improvise as we go along, there are absolutely things I know that don’t make it into the story, but will eventually. But by the end of the first arc, readers will know quite a bit about the history of the Programme.

How much has The Ninja Programme influenced the rest of the Valiant universe? For example, has the Eternal Warrior ever encountered a previous Ninja?

Undoubtedly, the Programme has influenced the wider world, but since their specialty is stealth and subterfuge, a lot of what they did probably isn’t known. It seems likely that the Eternal Warrior encountered an agent at some point, but that story hasn’t been told…yet.

What’s the one thing you’re most excited about for Ninja-K?

For me the most exciting part is the art. Then there’s the Valiant Universe itself. Aside from Livewire, who appears in issue #1, it’ll be a short while before Colin encounters other existing Valiant characters. But when he does, it’s gonna be explosive. Former friends may become foes. I’m really looking forward to that.

Ninja-K will be a monthly series of 40 pages, with the first issue being 48 pages. It’s due out on November 15, with issue 2 scheduled for release on December 20.