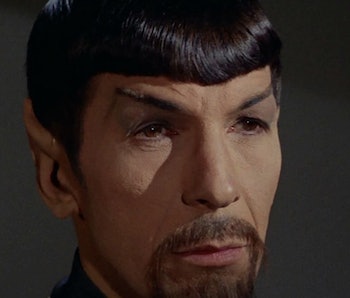 In the Mirror Universe, Vulcan dudes all have beards. It’s not a rule or anything, but in that alternate dimension, it just appears to be the way things go. And in the upcoming new episode of Star Trek: Discovery, it looks like the Mirror version of Sarek, Spock’s dad, is totally rocking a little beard.

On Friday, CBS released a new trailer for the 11th episode of Star Trek: Discovery titled “The Wolf Inside.” In it, the crew continues to be stranded in the Mirror Universe, desperate for a way home. Which, leads Michael Burnham face to face with her adoptive father, Sarek. However, in the Mirror Universe, Sarek obviously knows a very different version of Michael Burnham. As briefly shown in the trailer, this Sarek will perform a mind meld with Burnham, something we know she’s done with the Sarek of the Prime Universe, too.

Relevantly, for old-school Trek fans, the decision to show Sarek with a beard is awesome. Not only is it a callback to Spock’s infamous goatee in “Mirror, Mirror,” it’s also a shout-out to the Vulcan Soval from Star Trek: Enterprise. In, the 2005 episode of that series called “In a Mirror, Darkly,” the Mirror Soval was depicted with a beard very similar to Mirror Spock. And now, Mirror Sarek’s got one too.

But, oddly enough, there is one Mirror Universe Vulcan man out there who didn’t rock a beard. In the Deep Space Nine episode “Through the Looking Glass,” a Mirror version of Tuvok appears, shockingly, totally beardless. Notably, Tuvok’s appearance on Deep Space Nine was odd. The character’s normal universe counterpart was a regular on Star Trek: Voyager, meaning having him turn up on Deep Space Nine, as an alternate version of himself was a bit of sideways stunt casting. Contemporarily, this would be like if Discovery introduced a Mirror Version of Jaylah from Star Trek Beyond, but without explaining who Jaylah was at all.

To be clear, it’s not likely anything like that will happen in the future of Discovery, but when you’re in the Mirror Universe, you never know who you might meet.

Star Trek: Discovery airs new episodes on Sunday nights at 8:30 pm eastern time on CBS All-Access. Come back to Inverse on Sunday night for our in-depth coverage, including an interview with Shazad Latif.