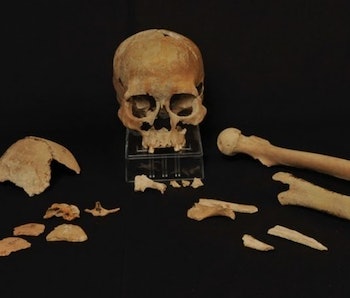 Scandinavia is best known today for its embrace of soft socialism and pop icon Robyn. But in times of old, the region was covered by a giant ice sheet. Then, about 23,000 years ago, the ice began to thaw away, revealing habitable land that soon filled with plants and animals. About 11,300 years later, humans, hot on the trail of the flora and fauna, began to colonize the peninsula. That’s where our clear picture of this neck of the world begins to get murky. We only an elusive sense of who these first Scandinavians were and how they got there.

Now, an international team of scientists believe that the first human settlers were a melting pot of hunter-gatherers who came to Scandinavia via two distinct migration routes. In a paper published Tuesday in PLOS Biology, the team explains that these Mesolithic humans migrated to one of the last places in Europe to become habitable for humans after the Last Glacial Maximum from what is now modern-day Western Europe and Russia.

These ethnically distinct groups start fraternizing with one another, and the their combined genes is what allowed later generations to thrive in the region’s extremely cold environmental conditions.

“Our findings are important for human genetics, archeology, and anthropology, and it will be interesting to see what similar approaches can tell us about the post-glacial population dynamics in other parts of Europe and the rest of the world,” study co-author Torsten Günther, Ph.D., a biologist at Uppsala University, explained in a statement released Tuesday.

The team hypothesized that humans from Western and Eastern Europe likely encountered each other in Scandinavia because archeologists have found similar stone artifacts and tools in all three regions. They tested this idea by sequencing the genomes of seven hunter-gatherer remains excavated across Scandinavia (which today consists of Denmark, Norway, and Sweden). These remains were dated between 9,500 to 6,000 years old and analysis revealed, in part, that Scandinavia at this time was more diverse than other parts of Mesolithic Europe.

“The genetic pattern shows how Scandinavia was colonized after the Ice Age, both by migrants from southwest Europe directly up into Scandinavia and shortly afterward by a second migration from what is now Russia,” co-author Mattias Jakobsson, Ph.D., a geneticist at Uppsala University, told The Copenhagen Post. “The latter went north of the ice-cap and along the Atlantic coast.”

The genomic data also revealed that the offspring of these different migration groups had adapted to the cold, low-daylight conditions of their high-latitude home. The Mesolithic Scandinavians contained a gene called TMEM131, which is involved with long-term adaption to the cold, and lighter eyes and hair than the humans who first migrated there — which is seen as another adaption to low light levels.

These traits are still reflected in the blonde, blue-eyed people who live in Scandinavia today, who ended up looking the way they do because their ancestors followed food to a hella cold place.