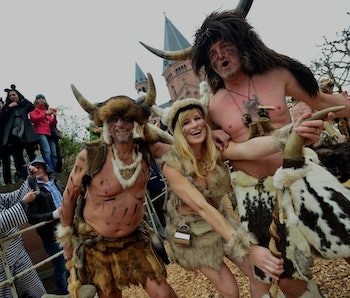 Around 25,000 years ago a population of hunter-gatherers stuck out a period of the Ice Age isolated in caves where southern Russia meets Georgia: the Caucasus region. They had arrived around 20,000 years previously, having split from others of their kind who moved upward and westward after migrating from Africa. These ancient people have been a mysterious contingent for academics — it’s been largely assumed that modern Europeans are a mix of three ancient populations. But by process of the first sequencing of genomes taken from human remains dating to the Late Upper Paleolithic period, an international team of scientists have discovered a fourth strand of European ancestry.

“This fourth strand is actually rather interwoven with other strands, and it shows that our ancestry is more like a web than a simple mix of a few independent components,” said Dr. Andrea Manica, a evolutionary ecologist at the University of Cambridge to Inverse. “These Caucasus hunter-gatherers seem to be very influential — after being isolated for a very long time, they played a key role in the formation of the Yamnaya, who brought the bronze age into Europe, as well as moving further East to contribute to West Asian populations all the way to India.”

The Yamnaya, a culture that emerged from the hunter-gathers seeking shelter in the Caucus mountains, moved in to Western Europe approximately 5,000 years ago, bringing with them animal herding skills and metallurgy. Because of Manica and his team’s research, released today in Nature Communications, we now also know they also brought with them to Europe this particular ancestral DNA. If you are descended from Europeans, it’s almost guaranteed this strand is part of your genetic makeup.

“The Yamnaya were only characterized genetically after the start of the project,” says Manica. “But when we saw that they had this unique genetic signature that was different from everything else known, we thought that our Caucasus hunter-gatherers, who lived just south of the Steppes, could be a good source. And indeed they turned out to be.”

The ancient DNA was pulled from samples considered to be at the crossroads between Europe and Asia. The Caucus hunter-gatherer genomes were taken from two caves in Georgia: one from the Mesolithic period and the other from the Upper Paleolithic: from Mesolithic Georgia a molar tooth; from the later a petrous bones. These samples were obtained by working on collaboration with the archeologists who led the excavation.

Via this ancient DNA, researchers could tell that the hunter-gathers who are the root of the fourth strand diverged from Western groups right as anatomically modern humans made their way into Europe from Africa. Because of these genomes, we now have an improved understanding of the genetic diversity that occurred through Europe after the last Glacial Maximum.

“The sequencing of genomes from this key region will have a major impact on the fields of palaeogeneomics and human evolution in Eurasia, as it bridges a major geographic gap in our knowledge,” said study lead author Ron Pinhasi in a press release.

More like this
Science
Jan. 22, 2023
Humans didn’t evolve to live in cold — our survival is a lesson in ingenuity
By The Conversation, Kyoko Yamaguchi and Laura Buck
Culture
Jan. 14, 2023
2,454 years ago, one eerily familiar event led to the downfall of Ancient Athens
By Rachel Hadas and The Conversation
Innovation
Jan. 19, 2023
A robot choreographer reveals why M3GAN — and all robots — should dance
By Molly Glick
LEARN SOMETHING NEW EVERY DAY.
Share: